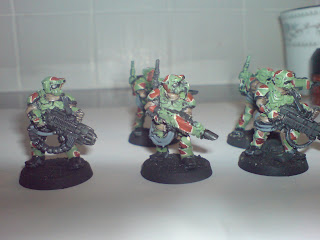 GW's metal Kasarkin (commandos[storm troopers]). I do like the figures. But at over £20 for a squad of ten they are not cheap (still not as expensive as the DKK though !). And the rumour mill for future IG releases is that there will be plastic storm troopers soon. So maybe this small group of five will remain as inducted sidekicks for the Inquistion.

Another, equally attractive rumour is that the other/alternative release will be Armaggedon Steel Leigon. It was ASL I wanted in the first instance - but could not find them and ended up buying DKK. Can I afford another two IG armies ? The idea of a valkyrie mounted storm trooper army or (and) another mech coy is quite exciting.