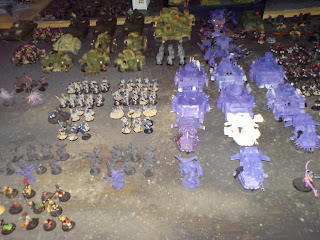 A selection of half finished stuff.

I've not got enough half finished projects kicking around. So I shall go here http://www.victorialamb.com/store.html to get a few bits. A box of Catchananans will get penal troopers torso(s) and the las gun arms (penal troops being undeserving of enourmous should guards).

A box of Gors will get Catachan torso(s) and arms. This will mean hacksawing the Gor bodies to get the legs, but will give a convincing squad of beastmen.

A box of Cadians will be put togeather with kilts and Tam'o'shanter heads. The spare legs will get FW Vraks bodies and arms.

Four quite different and characterful squads from a bit of cuttin' and shuttin'.
Posted by Zzzzzz at 22:26