This being the occasion of the Medal Ceremony;  Gen Tolstoy is making a point here; none of the Death Korps are here, they are holding the line whilst elements of other units are pulled back for the parade.  The Palladians, largely rouled back out of the front lines (as per 4* Gen Zhukov's instructions), are mostly on guard duty in the rear areas.

Zhukov has his own point to make, namely the representatives of the Legio Astoria being guests of honour; The whole episode around capturing enemy combatant witches was to allow the Ordo Hereticus to further legitimise the conflict, drawing in more resources. 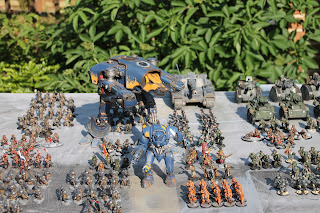 Each of the Warhounds is further protected by Knights of the Legio's leige-houses.  Their task, militarily, is to head off and neutralise threats to the Warhounds in situations such as Urban warfare, where the Titans might otherwise be vulnerable. 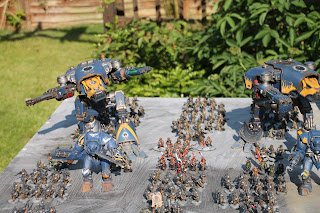 Behind the titans are three Platoons of C Coy of the (Valhallan) Kado 540th  These men have previously been fighting around the high ground to the NNW of Randstadt.  You can also see their attached Vostroyan Divisional liaison team (and their las cannon team, which is a bonus for the lightly armed 540th). 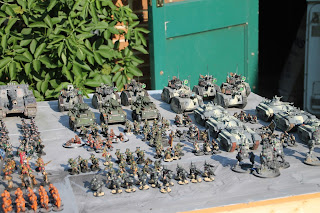 Here you can see a detachment of the Armageddon 22nd Armoured Regt with their attached ASL infantry screen, some of the remaining specalists of the Cadian 144th Long Range Recce Regt and at the front, Storm Troopers of D-66, actually a specialised Plague Zombie hunter unit from Agripinna itself. Once again, nestled in front of the Cadian Wolverine Annihilator Scout Cars, you can see the Vostroyan Divisional Liaison Team. 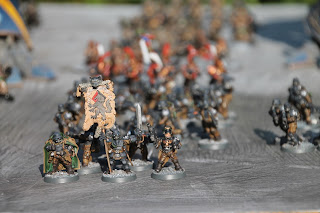 Here is Colonel-General Von Kreed of the Saranian Light Infantry, with some of his "Wolf Brigade" Gebirgsjeagers in their distinctive camouflage. 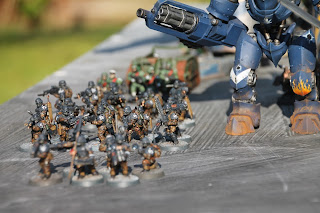 Another Platoon of Saranians, directly in front of Capt Aelious, of the Palladian Divisional Liaison Team. 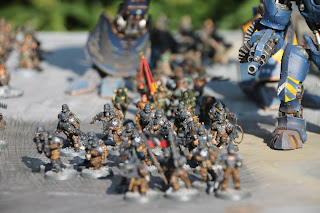 Another platoon of Saranians, in front of Lt Col Brisingstoke, of the Cadian 24th.  Shouting and drinking tea in a soldier like manner, in all probability. 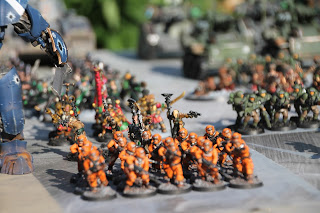 General Tolstoy and his command team, directly behind their meat shield penal detachment and bolt magnets Sanctioned Psyker Battle Squad.  Although they are out of focus in this shot, the gentlemen in black dress uniforms directly behind Gen Tolstoy are Lord Commissar General Harris and nine of his stoutest proteges.  Which must be a comfort. 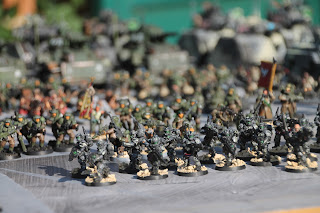 Here we can see the brave uber commandos of D-66.  All set to hunt down the foulest beget of the Great enemy.  Rather them than me.  Which is why they are there, and I'm watching this from orbit.  The newly breveted Captain Severous will pass along in front of the representitves of the Korps and receive his medal from the Lady Inquistrix whilst the Platoon is awarded the Aqilla Mundanis by 4* Zhukov.

This was all done on D-Day during the glorious weather, when PVP brought the Warhounds up.
Posted by Zzzzzz at 16:41