If you remember the battle report where the Blood Angels went hunting for Eidolon, you'll recall that the table was almost pure white.  Now whilst this is ok for photos, it's not the best playing surface, so on the last Thursday in July, I threw a bit of grey streaky lovliness over it, so it matches the other two tables.  The slightly patchwork effect you can see here is simply to add smidgeon of visual interest to the table in the case of games with very little terrain.

Anyway, Sat 02 Aug and the High Lord of Terror has gone to visit one of her friends so, with recently arrived reinforcements, I thought I'd take the chance for an army shot of my DKK.  Here it is: 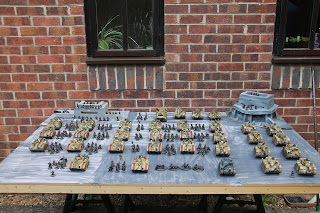 Guessing that you might want a little more detail, on the left at the back, arrayed on the tank bunker, are the 'spares' from the three platoon layout in front of you.  This gives me enough bodies to change out the special weapons in all of the squads and to field a extra squad or two if I use them as a Siege List army.   All of the tank riders/salamander crewmen are perched on the ledge beyond the parapet.  On the extreme left are the three 'spare' Grenadiers - two flamers and a hellgun. 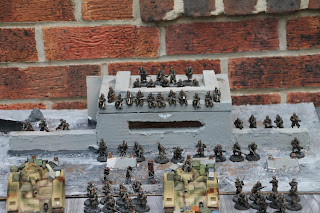 On the bunker to the right are the ML teams (My thinking was if I have an opponent who insists on a 5ed IG codex list, these just add a little more flexibility).  DKK don't normally field MLs, so we can assume that these are battlefield salvage.  And in front of the first floor bunker are the DKK Engineers. These boys were going to have 1/35 Luchs to ride around in, but now have a Chimera (with lots of resin add-ons) to convey their goliath to the enemy's doorstep.  But it's still in bits. 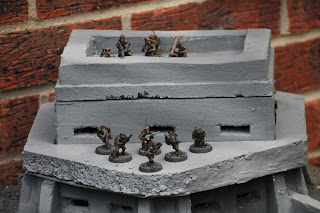 OC tanks, waving his sword about in true IG style.  Hatches, weathering, pintle mounts etc, all still to do.  Some of these tanks have mud and rust on already, but that's no big deal. 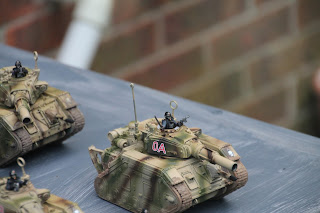 An Infantry Squad, just to illustrate that there are full squads next to each bus. 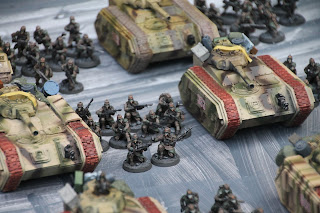 A Grenadier Squad, from the PzGr platoon.  Each PzGr Squad has a heavy flamer and two other special/assault weapons. 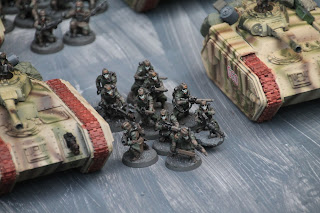 Obersturmbannführer Bloche and his command team, with banner, commissar, QM and bodyguards. 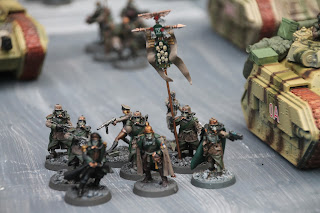 His 2iC, with Commissar, death banner and none of the comparative comforts of the senior command team.   Guardsman Von Marbo, there, crouched in the foreground. 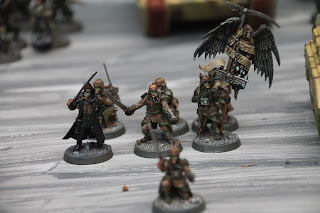 Another PzGr team.  On thing that I decided on, having all of these out on a table in front of me, was that the weathering on all of the vehicles ought to make them a shade darker - the infantry figures have a definite feel about them; which the Commissar's Panzer does share, so I can do it, I just have to find the time and get the process right. 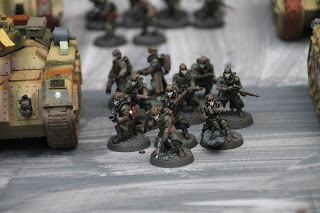 Just to show the rear of the command squad Chimerae (ie, CCS, 2iC and all PCS); eagle door and a banner in the army signature colour (Dark Angel/British Racing Green) bearing the legend "Krieg".  Just in case they forget who they are. 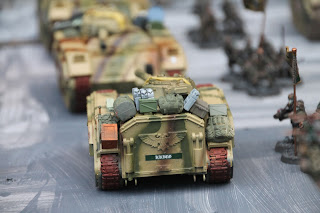 The QM party, next to their Fuchs. 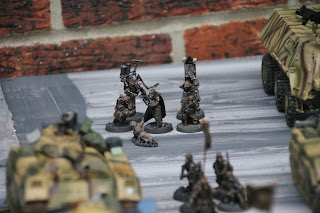 And a group shot again, hopefully showing the turret (tank)/hull (chimera) numbers.  It was nice to actually get to so this, I've been building this army for about eight years and this was the first time I actually got to see it on display like this.  I'm quite pleased with myself (as well as PVP, who painted all the little men) that it's turned out so well. 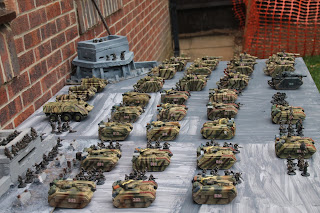