I've got three four fourtykay rool buks.  Hereafter referred to as BRB and a number.

I like BRB4 - it's got kill team and build your own terrain; possibly the last shred of the DIY hobby postulated in BRB1. 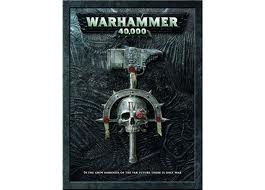 BRB1 (Rogue Trader) actually states that there arn't that many SciFi minis on the market (there weren't) and that you should use them from whatever source you could find them.  Yep, just in case you weren't a teenager in the early 80's Games Workshop told you to use things from other makers. 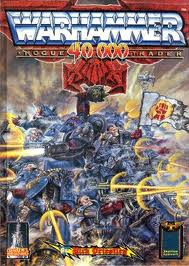 BRB5, then is the one I played most of (a whole four or five games), but is clearly a progression from the BRB4.  But doesn't have the same sense of freikriegspeil as BRB4.  (There probably was no sense of freikreigspeil at all, it's just I hadn't played forty kay for eighteen years...) 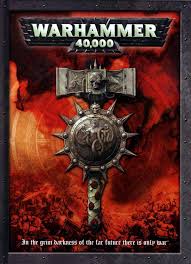 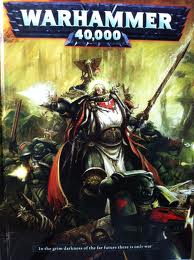 But at an average of two and half games per edition, this aspect of the "hobby" (and no, big game company, spending a lot on your products to satisfy my scifi gaming needs is not 'a hobby', it is shopping) is, over time, giving a poorer and poorer return on investment.  The basic turn sequence and BS3 needing a 4 or more to hit don't change.

I'd like to point you to this post on the Responsible One's blog, where he talks about why some of us might keep harpin' on about an older ruleset.  He's got a point.  But it's not that I think that older rules are better, I could never be arsed to learn them at all.

So I might just stop updating (BRBs - I'm gonna keep bloggin' as long as you keep reading).  If you wanna pop round for a game of 4ed, 5ed or 6ed.  Or even RT, that's fine with me.  Heck, those of you who have had the pleasure can confirm to anyone else that I'm not really gonna notice which rules are being used.

I might buy future codices and other products.  As far as I can see, all the previous edition codices still work with the basic mechanics, so I can't see any great problems.  Please don't view this as sour grapes; Most of you know that I'm a collector with a megalomanical desire to have my own 40K world and write it('s wars) up in detail.  The rules are a point of reference for me, not a mechanism to be exploited or defeated in order to win a game - yeah, winning would be nice, but the Devos IV war will be won by the side who spend the most blood and treasure, not the side with the best statline.

This is my hobby and I'm happy to share with anyone who expresses an interest.  I work quite hard to earn my own treasure to indulge myself with, so I'll do what I want with it.

Now, just so we're clear: I do enjoy playing, and understand that the rules inform and shape that experience and so on.  But the important word for me there is experience, as in I am participating in something with a friend or two or three for the purposes of having fun.  Which is rule number 1, remember.

Anyway, following in the footsteps of the laughing ferret and Mr lee and standing on the shoulders of the Mordian 7th, It did occur to me to celebrate my 400th post with a giveaway.  But it would be a case of  'just leave a comment' and I would then go through the motions of randomly selecting one and then just pick my favourite anyway*.  And all the stuff I have is half started projects anyway.