2014 reinforcements - Brothers of the Lostwithial

Black Templars - like space marines, but with more festooning and less common sense.  What's not to like ?
Some of these guys were painted by Golem, some by Raven's Nest Painting. 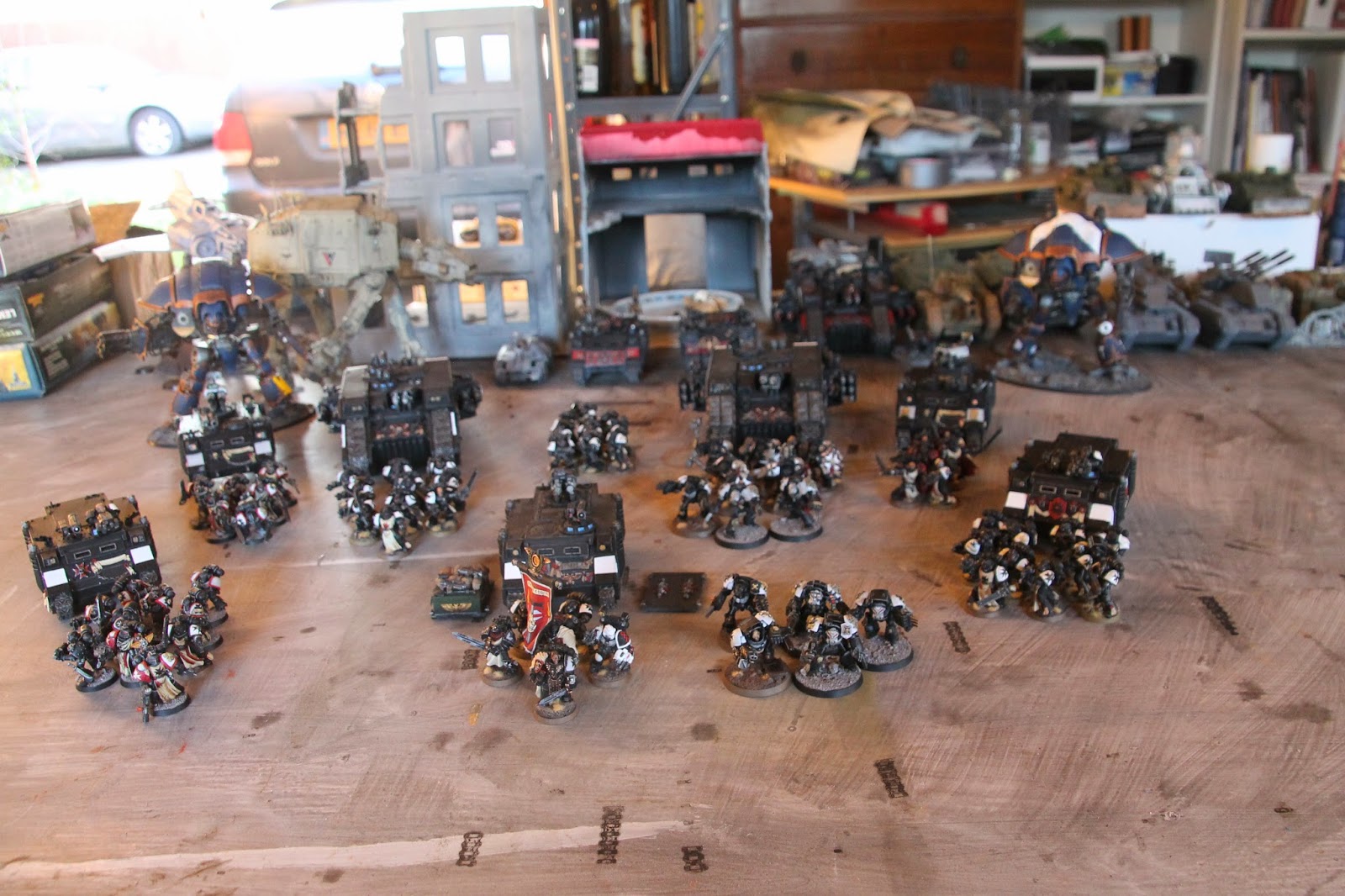 Arrayed for a shopping trip somewhere near the Eye of Terror.  Their favourite shopping day is of course Black Templar Friday.  The only guys catching a bus are the ten or so initiates in the middle at the back, everyone else has wheels or the opportunity to deep strike off the table and into history*. 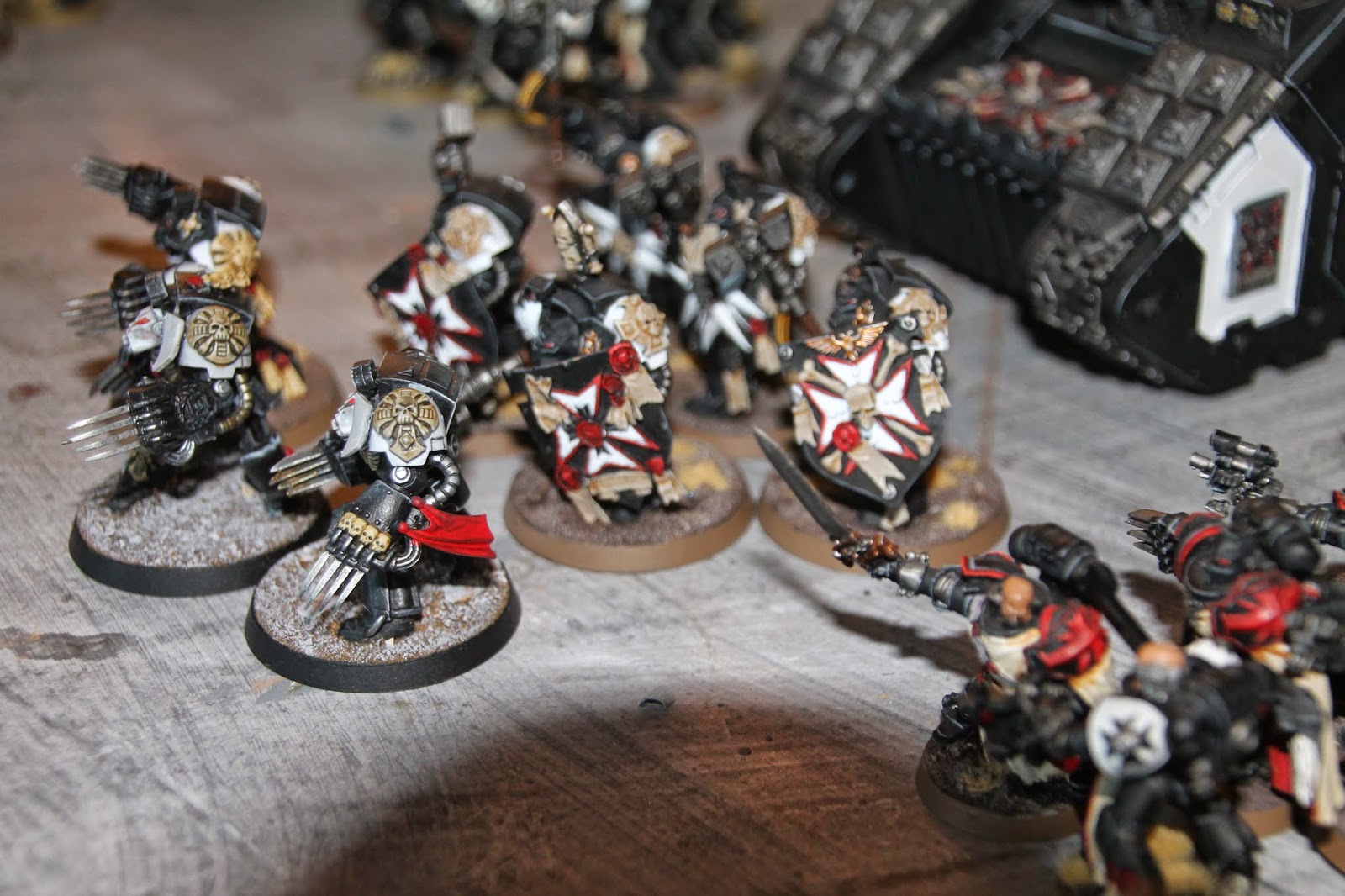 Eight Templinators (so a word).  Delivered by LR Crusader.  If you don't stop it before it gets to your deployment zone, you'll need a monstrous creature (or another bunch of termies) as a counter attack unit.  Unless I roll normally, in which case these guys are just extra crunchy dog food. 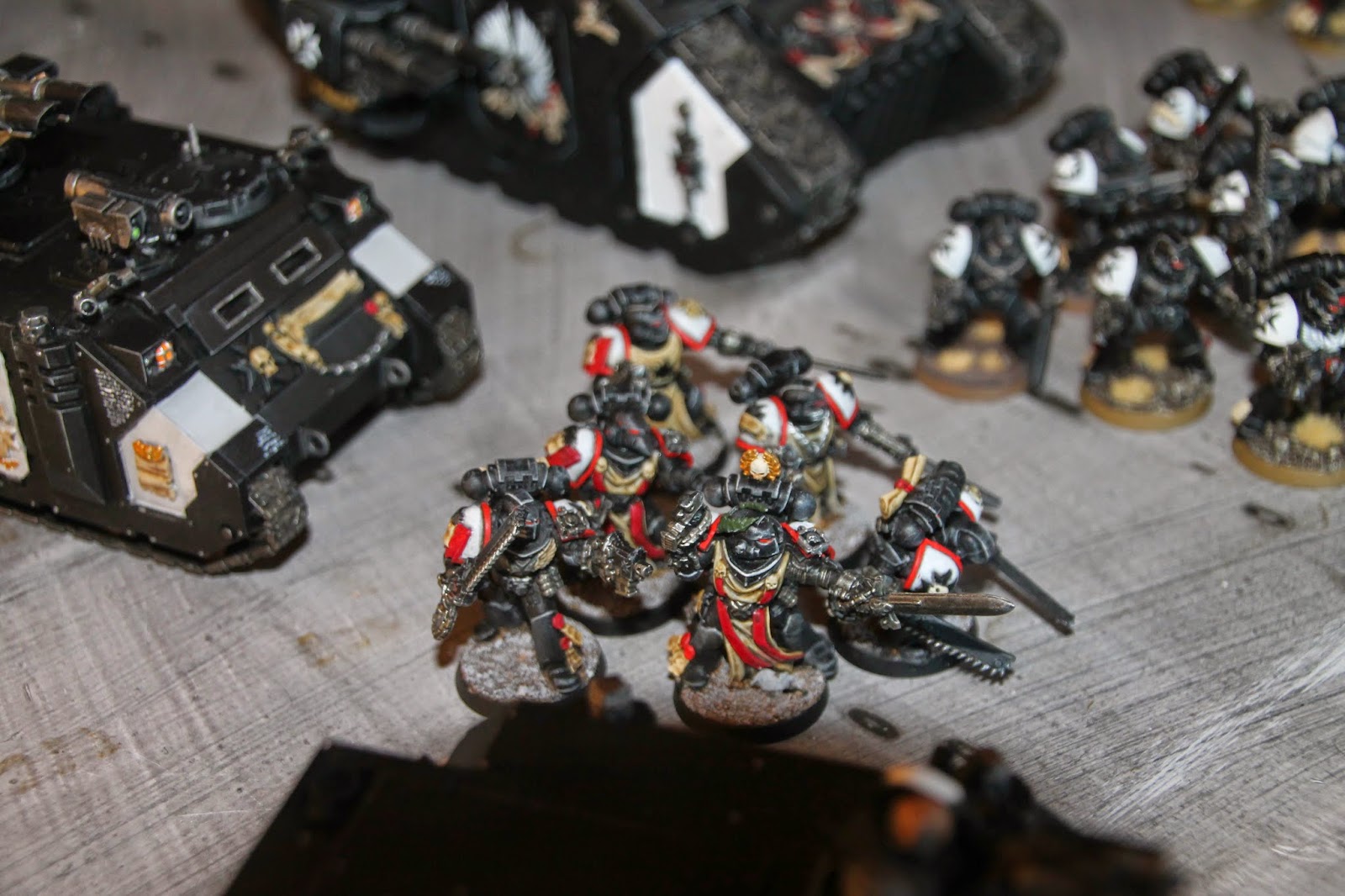 I love these guys - especially the guy with TL chainswords kneeling for a blessing. According to my codex the red edges are for assault squads.  I meant for these guys to be sword brethern.  Oh well. 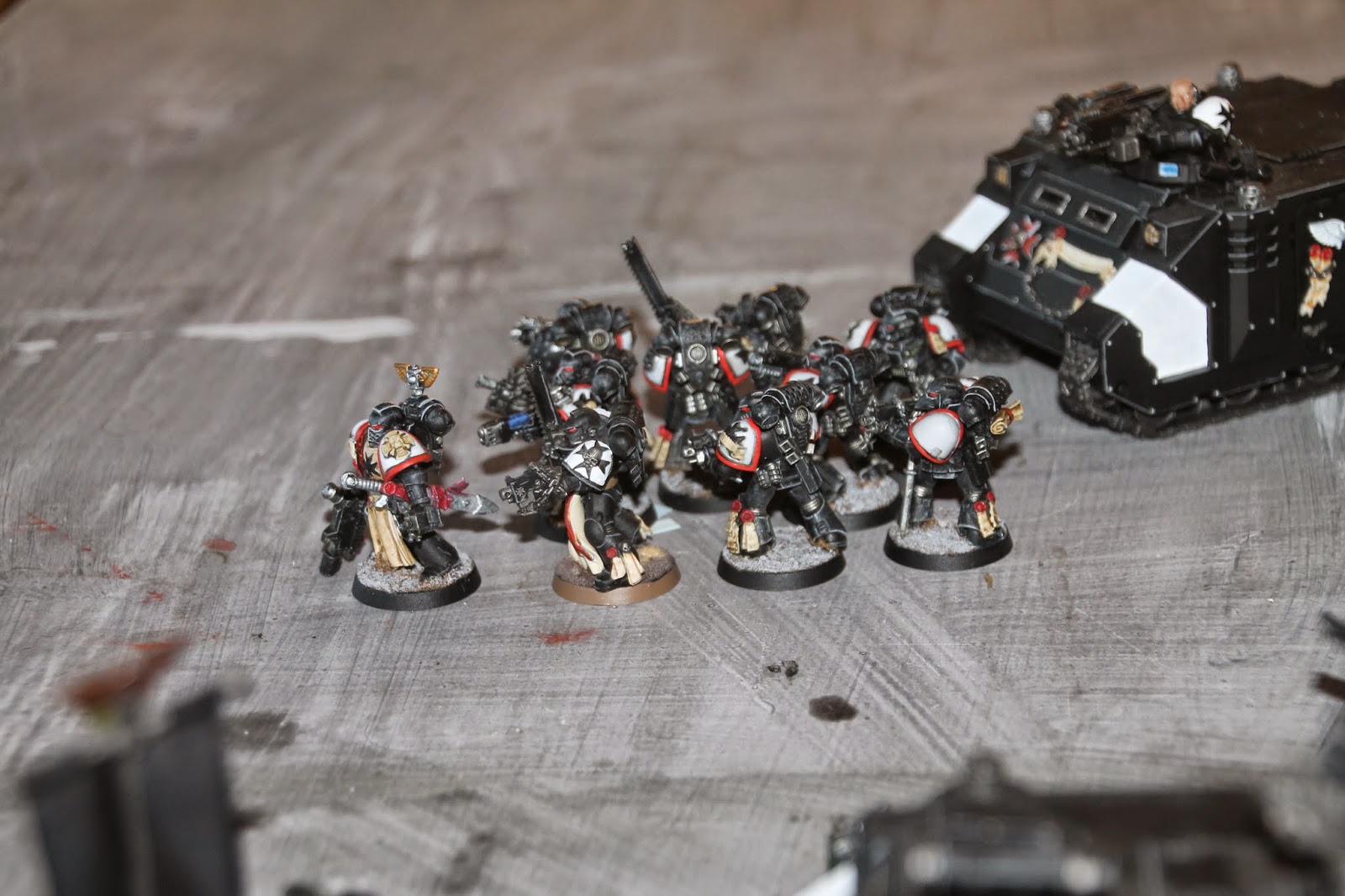 More of them.  Including one shrugging.  I dunno why, they seemed fine when I did them, perhaps he's just fed up with being angry all the time. And all those vows.  I will brush my hair 100 times when I get up. I won't dry my socks in the toaster. I will smite heretics.  I will not listen to Nena Cherry on my walkman under the covers after lights out. 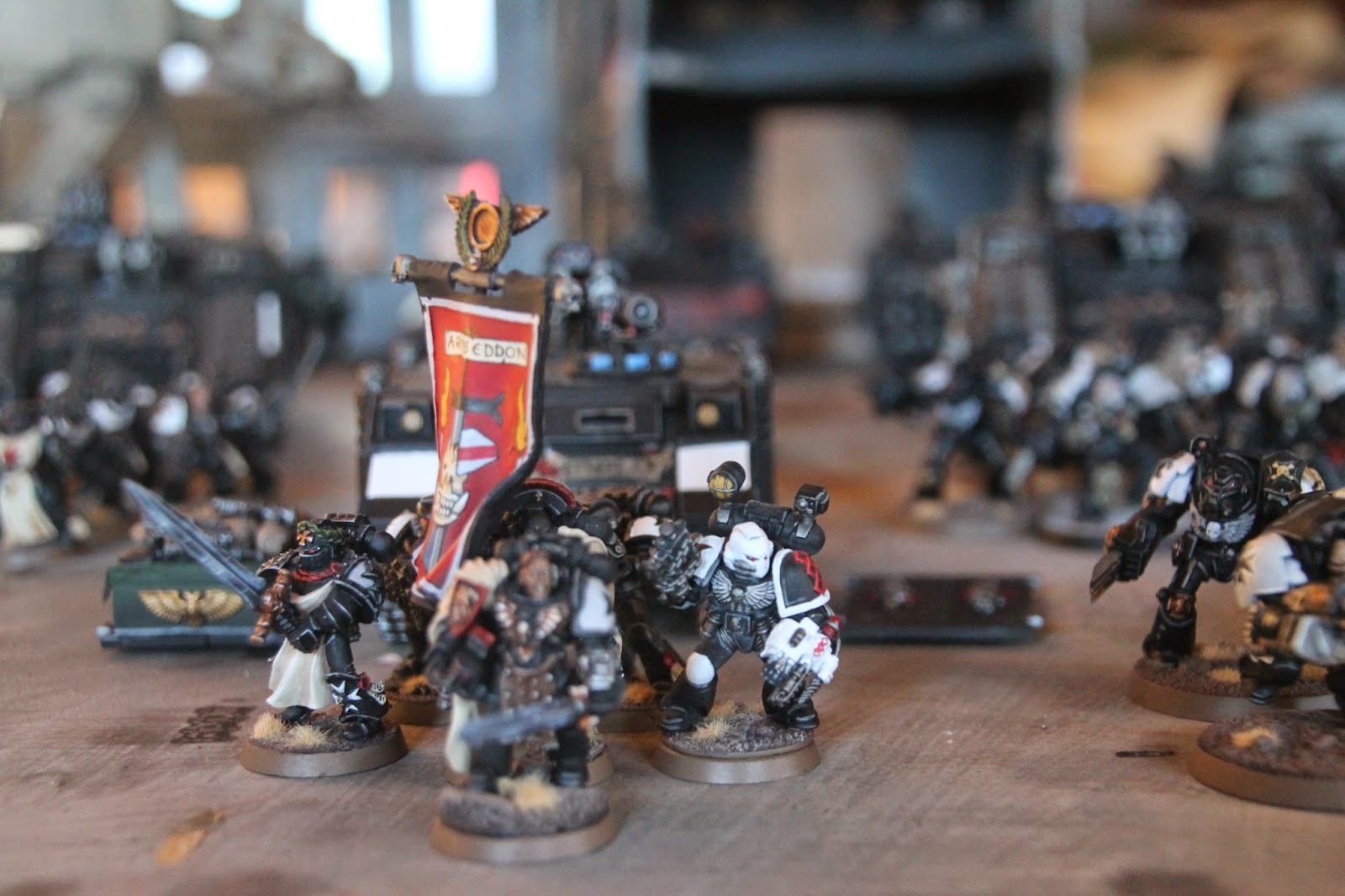 I know that Castellian Brodeep himself is slightly out of focus here, but Brother Moon (on the left)< the Emperor's Champion, is always ready to step up to the plate and take over should Castellion Brodeep feel at all off colour.  And he'd lead them into the fiercest warzones, not swan about the civilised imperium hunting heretics - that's gurls work.

No Neophytes, I just didn't want any - they're not being allowed of the ship because they've been naughty (?).  So no exo-suits, wolf cavalry, Thunderfire pistols or anything that does not feel like it belongs here.  Just bolter and chainsword, almost. Looking forward to a future iteration of the BT codex (mine is Mar '09), which apparently will be crusade focused and turn them into knights in space.

*Mr Lee once asked why I'd bothered with a reaper cannon on my 'Zerkinators (and by extension, why an assault cannon in the DS BT squad).  I think the weapons are present in the squads to mitigate against scattering off target and potentially not being able to play any part in the battle.  Tactical Dreadnaught armour and TL lightening claws might be really kill HTH, but if you're too far away, you need something in the squad to make up for it.

Pre publication update:  I was thinking that this bunch were finished - I had no intention to add anything more.  Then FW did this: