I'm building a third troop for the ASL tank squadron.  So these are likely to be 430, 431 and (eventually) 432.  The unpainted one you can see is from the bitzbox.  And as a part of the ASL, these two have plasticard vorpanzer. 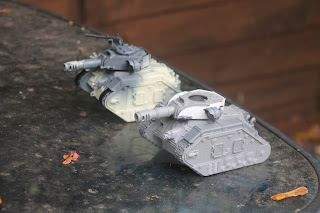 So other mods to match the existing ASL tanks include the side mounted searchlight and the smoke dischargers mounted on the vorpanzer. 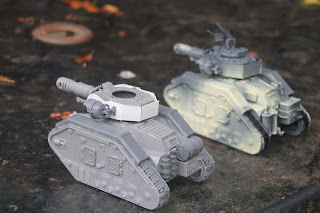 All of the others are configured like the unpainted one, with a supplementary 40 gallon drum on the toolbox. The painted one was obtained when I asked a regular contact if had a Pheaton pattern LRMBT kicking around that I could purchase.  It came with HB sponsons and the usual ugly laser cannon barbette on the front. 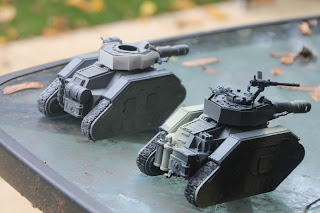 I have another Pheaton pattern LRMBT, found on ebay, on its way for the princely sum of £16.  Which is excellent for filling out the ASL formation to three troops, matching the numbers and TO&E of the DKK tank formation.  OCD ?  Me ?  I don't know what you're talking about. 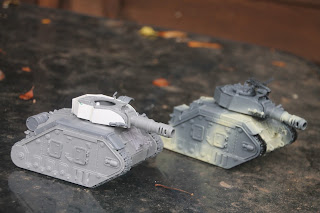 Another major change is that the previous tanks have a plasticard sheet over the hole where the barbette would be and then a 'normal' Chimera front weapon mount (all HBs, obviously) with the back end shaved down for a decent fit.  Since those tanks were done Karitas and I put together the DKK formation and therefore I had a few of the Mars pattern hull weapon mounts left over. 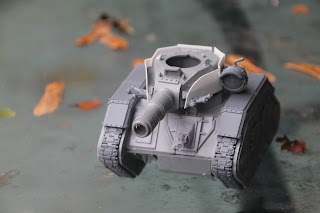 So these babies get them first.  There's another waiting for the last tank to add; after that I may retro fit them to the older ones.  Obtw, there's a stubber armed cupola to go on this one.  Its just camera shy. 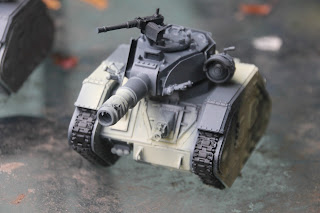 As you read this now, the unpainted one is now painted to the same level.  Decals next, then weathering, then dressing with stowage.  But not until No3 is at this stage.

Hope fully, this links back to a previous shot of the other ones.

Pre-publication update: No3 is now here as well, so I'll be able to get on with that soon.
Posted by Zzzzzz at 10:10