Random waffle about a particular sculpt

Some of you may remember a GW series where various hobby luminaries waxed lyrical about their favourite mini by one of their compadres.  Whadda bunch of luvvies.  Anyway, the recent influx of Cadians from Devon included a slack handful of junior officers in classic 2Ed pose:

Now people will point out that the figure is essentially over dressed.  He could easily be wearing a stillsuit under his padded uniform.  Although, he is nearly tall enough for his head even if his legs are a little short and his arms ever so slightly long.  But hey, I'm nearly his shape, so whilst he ain't perfect, he's not totally ridiculous. 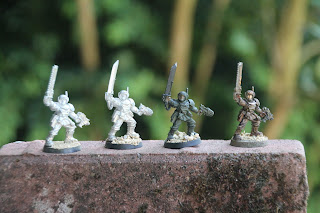 On the brick of scrutiny today then, four examples.  There were many permutations of this figure, with various combinations of peaked cap/helmet, plasma pistol/bolt pistol and chain sword/power sword.  So you could end up with any one of eighteen minis. I don't know if they actually ever did that many. Obviously this bunch mean business as they are wearing the Mk VIII bone dome. 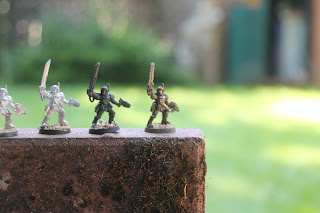 Anyway, the pose.  Leading from the front, the junior officer (and they were junior officers in that Codex, remember) has his best foot forwards and his main weapon pointing (vaguely) in the direction of the enemy.  He is beckoning on his charges, waving them on with his ceremonial melee weapon.  Crucially, he is facing backwards, away from his direction of travel, away from his purpose, his intent.  He has turned his face back to his men, to encourage, shout, cajole and perhaps even inspire them. 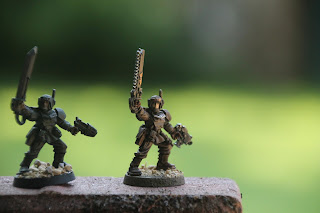 Of course we know that the ceremonial melee weapon he is brandishing is nothing of the sort, on the battlefields of the forty first millennium, that weapon is very real fighting instrument; the cleaver like powersword and brutal chainsword are not tools for the faint hearted.

So whilst this is not 'my favourite sculpt of all time, ever', I do think that he is idiomatically appropriate for the imperial guard.  And so commend him to the house.  I would be interested to know if anyone else out there has had similar cogitations about the little men they have been working on.