Just before Operation Dragonfire, in orbit.

There are reasons that the imperial Navy would not drop troops in position around Xyphonica.  And that they would only drop troops at Fort Nuttar when the FLOT was already in the Western Suburbs of the city, hundreds of Kloms away.  All of which date back to the time when it is alleged that the Blood Pact arrived on Devos IV.

Investigations after the event determined that the mass conveyor пелерина Интрига[1] had been converted to a troopship at the Imperial Navy’s Belis Corona naval yards nearly 500 years ago.  It had lifted troops to warzones around the Galactic Core for 157 years, before being attached to the Imperial Navy’s 876th Fleet at the outset of the Sabbat Crusade.  After seven years, including hot dropping onto Balhaut[2], the пелерина Интрига disappears from the record[3]. 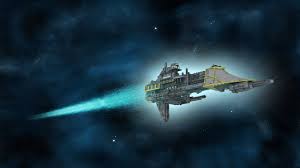 The ship, all three and half thousand meters of her, appeared at the Naval Way Station at Aurent[4] early in 857.M41 reporting for duty, carrying the Mordant 303rd “Acid Dogs” as a ‘ready to deploy’ Astra Militarum formation.   They were issued with the appropriate codes, assigned an escort[5] and despatched to the Devos system.   All of this is pretty usual.

Two months later, longer than the standard journey time from Agripinna to Devos, but not remarkably so, the пелерина Интрига slid into orbit.  Her escorts remained in their allotted positions as she moved into low orbit, all the time following the instructions delivered by the task force flagship, now the Dictator Class Cruiser “Slaydo”.  The пелерина Интрига announced that she was ready to discharge her cargo and then reported a minor fire in the lower decks.

The lead ship of what had been her escort detail reported that the four Dencara class escorts[6] were still hot (to move, having not yet powered down to their geo-stationary orbit) and therefore available to move to collect escape pods should the worst occur.

The Slaydo turned her augurs on the пелерина Интрига and failed to locate the reported fire.  In spite of this, she issued the order to move the escorts into rescue positions, even as she demanded that the пелерина Интрига confirm the location and extent of the damage.  The troopship swung into an ever lower orbit, complaining that it was becoming harder to maintain her position.

Listening in, the four escorts, 11,000km closer, turned their augurs on the supposed location of the fire and also could not detect any damage.  However, what they could clearly see, which the fleet commanders on the Slaydo could not, was her drop ships beginning to cycle through their launch patterns, over the wrong hemisphere of the planet.

The master of the Captain Gunnerson reported this to the Slaydo who challenged the пелерина Интрига; the troops were supposed to be landed at the starport, not directly on the battlefield; this had already been communicated and acknowledged, why were they now disobeying instructions designed to keep Imperial Navy assets safe from ground fire ?  The reply was that if the fire on board became too big to contain, the troops could be saved by disembarking now, before it was too late.

Whilst ostensivly  plausible, this was not consistent with the initial reports of a small fire.  The reports of a small fire were not consistent with the lack of any sign on the augurs, either.   Not the close up view from the escorts nor the powerful sweeps of the Slaydo.   The drop ships dropped.  Taking 22 minutes to make planetfall, 30 minutes to disgorge their load[7] and then 38 minutes to re-dock and then begin loading again. 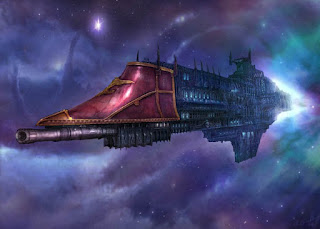 72AG were immediately on to their Imperial Navy liaison teams.  Why wasn’t the regiment being delivered to the star port ?  If the prime mover was in distress, why could the drop ships not push further west and allow the unit to be extracted later ?  Close Orbit Command, suitably embarrassed, immediately sent as many assets as they had to discern the situation and help where they could.

The пелерина Интрига’s dropships went through three cycles.  The ship was still not giving satisfactory answers to the Slaydo’s questions, the first marauders over the scene reported taking fire from where they expected to find disembarked guardsmen.

The Ordo Hereticus delegation had made sure that one of its members was on duty on the Slaydo at all times.  At this particular moment, that person was Inquisitor Hallas Blingnor.  Having been warned by his immediate superior about spoiling relationships with the other agencies involved in the campaign, he had, perhaps uncharacteristically, refrained from ordering the Captain of the Slaydo, Rear Admiral Devolt, to carry out what ever thing first popped into his reactionary, puritan mind.

Instead, taking advantage of his personal relationship with Castellian Brodeep, Inquisitor Blingnor ordered the Black Templar Strike Cruiser, the Lostwithial, to fire on the  пелерина Интрига.  Un accountably, the troop transport seemed to have been watching for ships powering up their weapon systems.  The troop ship was designed, like a space marine battle barge, to do its job in low orbit under fire.  Its shields went up.  The last round of drop ships departed.  Whoever those people were, barring the usual casualties due to shaking and impact, they were now down[8].

The пелерина Интрига ran away from the Lostwithal and the rest of the Imperial Fleet[9], largely in geo-stationary orbit would take hours to make ready and get underway.  But the Dencara Escorts were close and ready for action.  Flipping from rescue to attack was a change of thought and attitude, with no requirement to change any system.  Already at action stations, they raised their shields and joined the fray.

Whilst they did not have enough fire power to take the пелерина Интрига down straight away, it could not evade or outrun them and didn’t have the firepower of its own to do more than superficial damage to the Commissar Yamoto and Colonel Jacka.  Targeting the drives,  the escorts subjected the пелерина Интрига  to 54 minutes of constant strafing; the troopship was soon drifting.  An hour and seventeen minutes later, the first Black Templar drop pods hit the embarkation decks.  The last four squads of Black Templars from the Lostwithial would assault and clear the пелерина Интрига.

What they found there was evidence that the forces allied to Magister Sholen Skara had seized the vessel in the massive Naval Engagements around Parthenope during the Sabbat Crusades[10].  The vessel had quite obviously, since then, been used by the Great Enemy to ferry his soldiers around.  There was every indication that those landed were kin to the Blood Pact or Sons of Sek.  The Black Templars set the hulk on a course to the sun and recovered their drop pods.

Inquisitor Blingnor had scored a famous victory through his eternal vigilance and keen instinct for confronting heresy[11].

[1] “Cloaked in Intrigue”
[2] 765 M41.
[3] Obviously it remained a part of the Imperial Navy until the Naval Battle at Parthenope, despite the loss or destruction of pertinent records.
[4] The Imperial Navy’s waystation in the Agripinna system.  The major travel nexus into and out of the EoT warzone as well as the home of Klestor Sector Command.
[5] Four Dencara Class Fleet escorts, the Captain Gunnerson, General Estra, Commissar Yamato and Colonel Jacka.
[6] The Dencara class fleet escort is essentially a Firestorm class frigate with the engineering decks configured differently to accommodate an increase in shield generator capacity.
[7] The Infantry units were landed almost in the western suburbs of Xyphonica. An ideal position to assault the city, perhaps, but not much good if you wanted much of the regiment left after the action.
[8] Estimates range from 4000 to 8000 soldiers.
[9] Taking into account the atmosphere of Devos IV, the пелерина Интрига was over the horizon within 12 minutes.
[10] A notable disaster for the Imperial Navy, 767.M41.
[11] In all his years of shooting them all and letting the Emperor sort it out, it has never once occurred to him that he might be wrong.
Posted by Zzzzzz at 00:41