Interestingly, perhaps, No1 daughter has hit the age where her Brownie Troop/Pack are going to parade on Sunday.  I'll have to find my beret and polish my shoes.

Now, there has recently been another anniversary.  2000AD has reached Prog (issue) 2000.  There is a comic shop (nicely hidden up an alleyway) in Banbury who nicely managed to source me one of the reprint copies, the first edition having all sold years before the event one imagines. 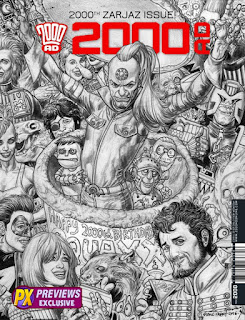 This is part of my childhood.  A part of GB plc for forty years etc.  I started at prog 3 and carried on through to when I hit my tenaged years and lost interest in everything except goofing about and not washing.  My mum (gawd bless 'er) used to read it as well.  She wouldn't really try to engage her grunting son but did offer on which Judge Dredd storylines she approved or disapproved of in some effort to influence the much younger Zzzzz.

She also bought me my first couple of White Dwarf subscriptions.  I remember being slightly disapointed that there wasn't some nod to WD40 in WD40, but then, one can't have everything.  I also remember some of my more politically aware friends having quite earnest conversations about the 'Democracy' Judge Dredd storyline.  But I'd moved on by then to Kerrang and the NME.

Now the older me doesn't really have the inclination to buy 2000AD every week, but I can be persuaded to pick up the anthologies of collected strips.   John Day over at Fallen Princes often gives pointers to things to look out for (as well as beer recommendations - what's not to like ?) - Slaine, Judge Dredd and Rouge Trooper already grace my bookshelves - when these are complete I may well for others - the temptation is to collect the ones which I remember with fondness (Bad Company, ABC Warriors etc) but there is bound to be more good stuff which has happened in the intervening 35 years which I'm not aware of, but might be worth picking up.  Now I'm 48, I just sort of hope that I've got enough time to do all the things I want to do before I fall off the perch. 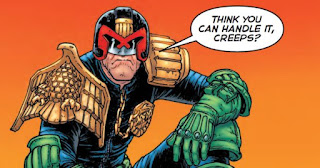