So,  I have some fluff for these boys already, but it can wait until there's three-colours-minimum on them at least.  But here are some notes on construction. 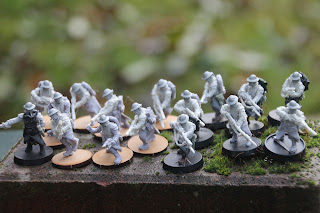 The brick of scrutiny is a bit damp at this time of year - that patch of moss is bigger every time every time some little guys form a resin human pyramid and climb up for their photoshoot. 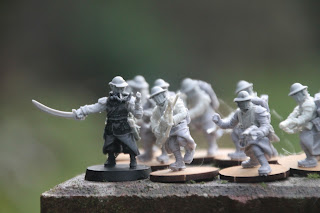 These guys are DKK legs, VL victorian torsos and arms and Puppetswars heads.  I've included a few shots to show how they are dressed about the middle - a variety of bits from FW, VL and Raging Heroines. 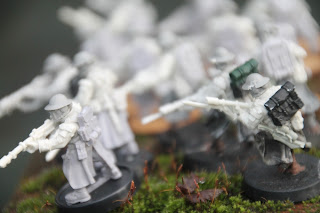 A couple of guys with FW packs from Devon 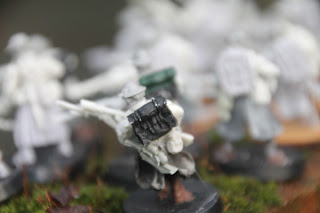 Some of the helmet rims were damaged during the conversation - annoyingly.  I do like the puppetswar lids.  But will be painted up as battle damage.  I think these guys will suit the worn look (?) 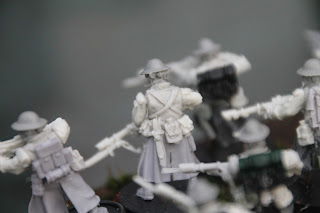 A decent illustration of the variety of kit carried.  I was sort of anticipating a formerly-uniform-but-now-having-more-cobbled-together sort of look for them.  I think the models do that, now to sort out a suitable paintjob. 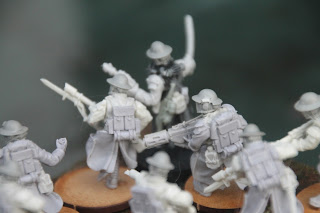 The special weapon guy with the DKK melta gun. 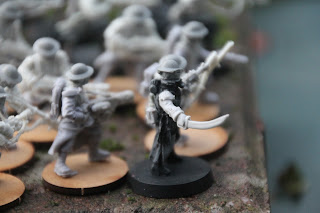 The junior officer type.  There's sixteen of these so far, I'm only anticipating there being twenty of these in total, so the Jnr Offr may end up functionally being an NCO for list building purposes.  But if I do end up illustrating the conflict by showing the Macharian 203rd in a picture, then an officer waving on his troops would be appropriate.
Posted by Zzzzzz at 02:20