One of these commandos is a lady called Sera Pahuelpan; she is a scion of the ruling house of the Filario Industrial Syndicate who own a significant share of civil engineering companies on Palladia as well as interests as diverse as hospitals as far away as Jornath and even abattoirs (now destroyed by war) on Devos IV.

Her father, Arvies Pahuelpan married into the Etaltua family who own outright a chain of eleven hives on Palladia Prime as well as many more in syndication.   He was a hive ganger.  His children were raised in a very peculiar manner – half of their time they were raised in the pressure cooker environment of High Society with it’s academic and societal expectations and the other half was a curious mixture of brutalisation, combat training and lessons in planning and influencing delivered by his former gang mates.

Just at the age she was due to finish school, her parents were killed (by a fire bomb in a restaurant) in an internecine vendetta the like of which rearranges the top levels of the rich and powerful.  She and her other siblings were abducted and sold to a pit fighting gang in one of the mining outposts, at which point her father’s seeming overly harsh treatment of his own children began to make sense.
Two years later, in one of the pogroms which sweep the Palladian Mining Colonies from time to time, she and her remaining brother escaped.  Staying firmly in the underworld, they set out for Umbria et Etaltua[1].

It was relatively easy to find allies who also had reason to want revenge on those at the top, some for reasons directly related to those people and some for more general or political reasons.   There are plenty of reasons to be angry with the ruling elite of a hive city; economic, political and religious differences, segments of the population forgotten, internment without trial, failure to ensure security where it costs but does not deliver returns, pollution, lack of health care, lack of care, lack of opportunity, rampant corruption and cronyism.   They became one more clique of violent dissidents in the underhive. 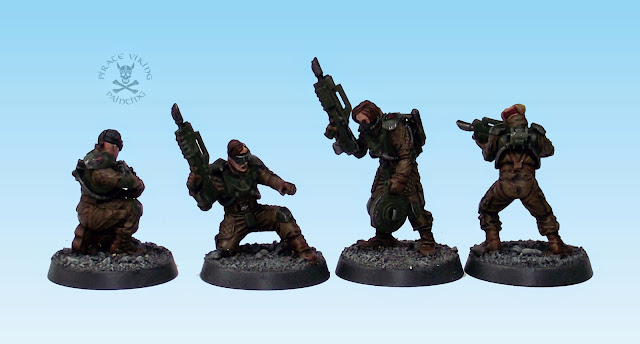 Over years, patient diplomacy forged an alliance of several major Hive Gangs; but in the end the gangs sold her brother to the ruling family in a blatant double cross.  Sera escaped due to random spyrer attack on those chasing her.

The Inquistion came, chasing mutants.  They gutted the staff of the ruling house and they would obviously not be able to hold onto power.  With the remaining allies she had, she infiltrated the upper spires and fought her way into the inner sanctum; after all, she grew up there, the security had not been told to forget the dead, so she could just switch off all of the automated measures.
That’s when her unexpected new life began.


[1] The region of Palladia where they were raised, where their parents were killed and where those killers were still enjoying the lifestyle of hive rulers.