A while ago, Admiral Drax expressed incredulity at some DKK needing re-painting.  So just to reiterate, these are the orphans from the internet - they're all the wrong colour(s) and of varying standards of finish and repair. 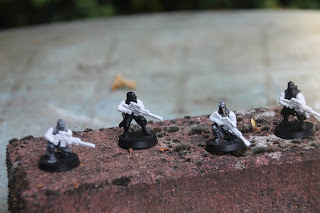 DKK with sniper rifles.  Ghillie suits are a fantastic modelling option but I don't know if I'm up to that yet, we'll see how these go.  There is already one Artillery unit sniper, so two of these will go grey with mustard facings.  Which means I'll need another one to then have a set for the Brown Kreig.  I'll need some more bits - most of which I probably have but just need to find. 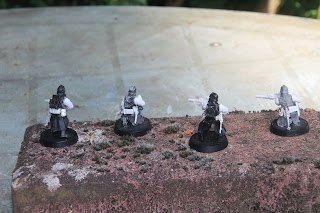 The rifles and arms are from Anvil.  Good stuff, reasonably priced and quick delivery.  I love VL stuff, which although sometimes looks a little odd on line, that's because it has been designed to be included as a part of a model.  But Australia is a long way away (Ask Col Aukland, te he) so the delivery times can be long. 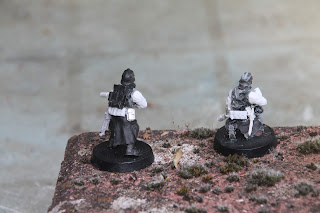 There's a few FW bits and some white metal pouches from Pig Iron.  I love the Pig Iron stuff and was as pleased at their relaunch as I was sad when they shut up shop. 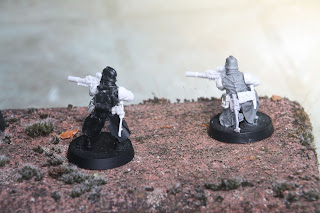 Getting ready for sniper duels in the ruins of Xyphonica.
Posted by Zzzzzz at 10:07