Sisters of the Casa Rosmaninhal of the Order of the Sacred Rose.

One of the other allied Priories of the Order of the Sacred Rose sent a delegation to aid their sisters on their mission to Devos IV.

Originally this was a strong delegation of well organised, aggressively militaristic Adeptas Sororitas, with  two squads of Seraphim, forty sisters with Rhinos and additional heavy support.  However, the attrition of usual warp travel that such a journey brings means that only five sisters arrive on Devos IV.

The fact that these five have survived against overwhelming odds and literally waded through the mashed bodies of their sisters to get to where they are today has them burning with zeal uncommon even amongst the evangelical hard line psychopaths of the Adeptas Sororitas.  Woe betide anyone who has anything to do with them. 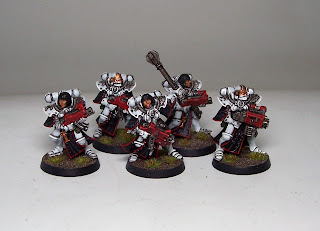 Again, these were painted by Golem.
Posted by Zzzzzz at 22:10