Iggies reclaim the Brick of Scrutiny from the Arch Fiend 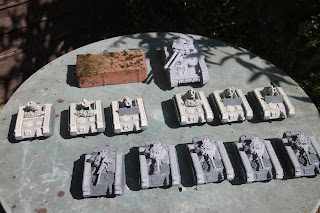 I've put together some reinforcements for the absolutely-finished-never-to-be-added-to DKK.  Because reasons.  Another zug of mid turret Chimerae for the Mechanised Company, a third super heavy, a Macharius Vanquisher and a half battery of Griffins. 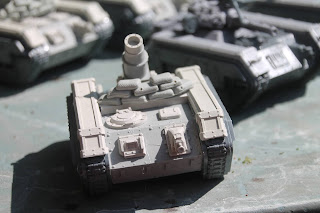 The Griffins are Models and Minis kits.  So these kits are good; the design is well thought out, the actual modelling is just exaggerated enough for 40K and like the not-manticores, they are clean castings with not occlusions.  But models and minis is a one man band working under some awkward constraints not within his control; so like I said before, worth buying, but you're going to have to wait if you're this side of the pond. 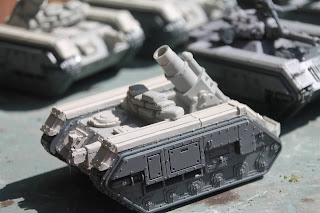 The only GW bits of these are the track units; the hulls are also a Models and Minis kit. Handy to know you can get them somewhere if you're whuppin' up some chimera after market kits. 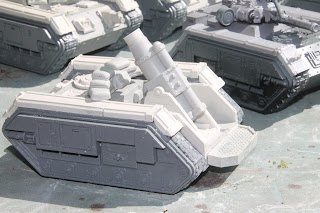 The track guards are also Models and Minis.  The kit includes the arrangement of sandbags around the front - I've mixed it up with a couple of spare armour plates as the Emperor loves infinite variety.  The only modification I've had to do is a bit of sprue (I've used the fairly substantial bits of square section resin from the Griffin kit) to lift it up a little. 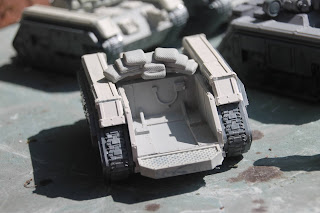 Without the heavy mortar in it, just in case you were thinking "I wonder if I could turn that into a Salamander ?" 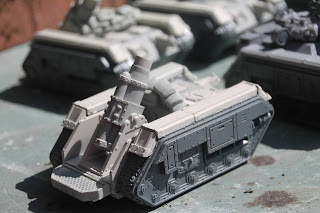 Not shown here are the panels which kit neatly inside the walls of the fighting compartment - with a pair of humungus mortar bombs on each side.  These are great, I've left them out to be painted separately - actually fitting them will depend on where the crew fit in. 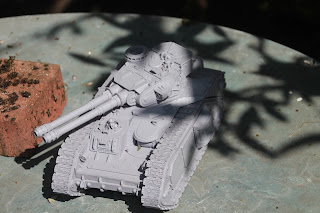 The Macharius you've seen before. Hopefully including it here will mean progress finishing it.  But it does look like it's done a good job of scaring that scion of the ruinous powers away from the BOS. 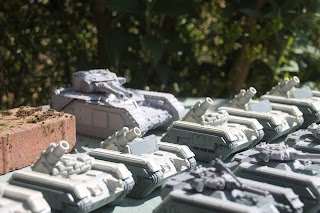 The Chimerae are Blood'n'skulls Industries capricorn hulls with FW autocannon turrets (some filing of the hole in the Blood'n'skulls chassis needed to get a good fit).  The turrets have the usual plastic kit searchlight side mounted behind the ammunition bulge.  Like the ASL LRMBT, the searchlights are side mounted to keep the profile down.  The Trackguards were an ebay purchase.  They're really good, I must look them up again at some point. 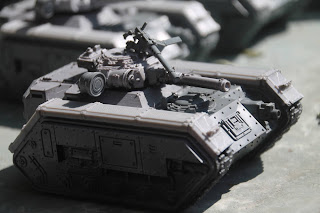 Stowage, cables, barrels, tools and Heavy Stubbers all to do.