So here's 114 Mech Coy without their vehicles: Along the front (L to R) are the Coy Cmd squad (somehow shrunk to 4 ! wtf ?) The fire support squad at the Coy Cdr's disposal, the two commissars, the QM and the Engr det. Now behind them are two platoons of five squads (six including the Platoon Cmd Sqaud). I suspect that my fuck up might be that in terms of Chimera, each platoon has five. Which means I'm bodies over, rather than bodies short. hurrah. 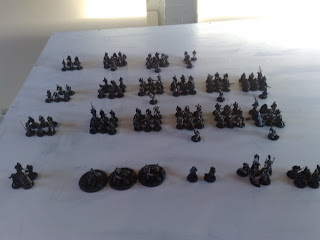 Of course that still does not explain the shrinkage in the Coy Cmd Squad. The rear formation (on the R in the picture below) is the Grenadier Platoon. I have more Grenadiers to add - another squad, another HF team and two more lots of Melta and Stubber. So that lot spread out should make up enough for the five squads in that platoon. 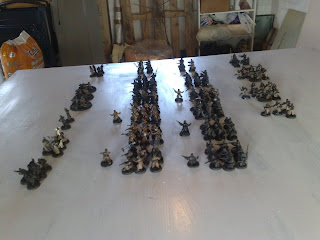 The fact that I am in fact a few bodies up means that I'll be able to find the missing watchmasters (squad leaders/sergeants) who are obviously AWOL in the picture above. I've got the shoulder plates from the command squad upgrade pack kicking around somewhere as well, so I'll be able to beef up the poor Coy Cdr's squad. I also want another platoon command squad (will come off Army Builder as another Coy Cmd Squad) to act as 2iC.
114 Coy has three Fuchs; one for the QM, one for the Fire Support team and one for the Enginseer. The Engr Det will hitch a ride with the Enginseer.
The Engr Det will consist of:
Enginseer (or two) with two servitors (each), one tech and one HB. The DKK Engr squad, the Hellhound troop (three). If I get a Demolisher, this will also (obviously to anyone familiar with any AVRE) be an Engr asset.
So between the three Mech Platoons, three Panther Vanquishers and Engr Det, my DKK force is happily into apoc territory.
'Tis a pity that none of it is painted.