This is another not IT related rant. Most of my IG live in a "Figures in Comfort" case in the garage. I was speaking with Karitas earlier in the week and this prompted me to look in on some of the little men this afternoon. 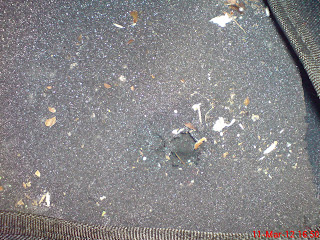 So, I put my hand under the lid and felt damp. Odd, as the garage is dry, n'cest pas? Also there was a small amount of random material in there, tiny bits of windblown matter and other less identifable stuff. I know the smell of rodent urine and was immediately sure that Charlie (Charlotte) Mouse was using my army case as a toilet. 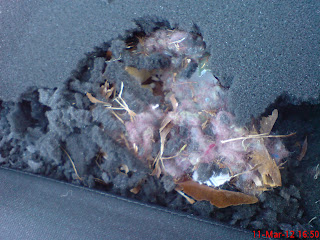 Removing the dirty foam sheet revealed the top of a quite obvious (and cosy looking) nest. 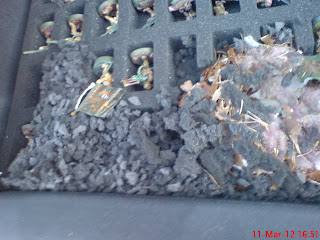 As I dug deeper, however, it became obvious that the toliet was next to the door, as it may be in your house, gentle reader. The picture above shows where the figure foam has been chewed up and a nest made using paper from somewhere (army lists ?) and fluff from the tumble drier. That round object is a mouse nest and does indeed have space inside for a mouse family. Fortunately for me there were no tiny pink naked bodies in there. 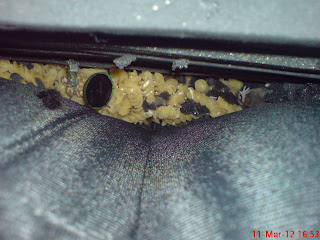 A shot down one side. Quite clearly there is an upside down guardsman whose foam has been chewed up, the rear end of the perpetrator (to the right of the photo) and a sizable handfull of fuselli (the English name for that shape of pasta). Charlie and her industrious family have imported the fuselli from somewhere else, I don't normally keep pasta in my army case. 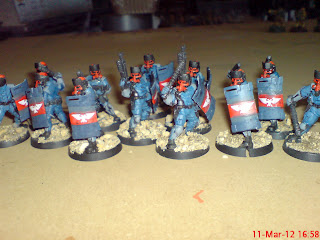 Some of those rendered homeless by the mice; in this case the arbities riot squad. Neither they nor the might of the Imperial Guard could defend against Charlie and her offspring. Kizzie, who is 50% English Springer Spaniel, was disinterested as well; not the useful 50%, then...

Just as I did this, I turned back to see Charlie Mouse, bold as brass, on the lid of the open case. She didn't stop, just ran off, well within 2m of the mighty hunting dog. Who just sat there, looking at her tennis ball. 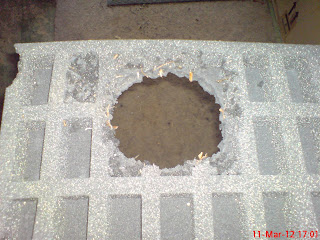 Of course, like any modern des res, Charlie's is a multi floor apartment. The Iggies who lived here will be homeless for a few weeks (it'll give time for the smell of mouse pee to disipate). 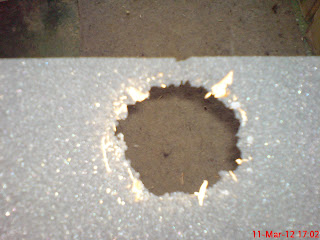 This was her mezzanine floor. As regulars will appreciate, her ability to describe a circle is much better than mine. 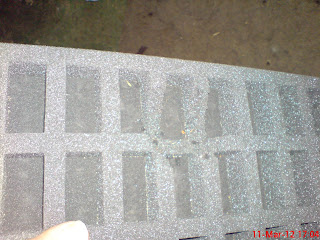 This tray has the bottom of the spherical nest in it, which you can just descern. 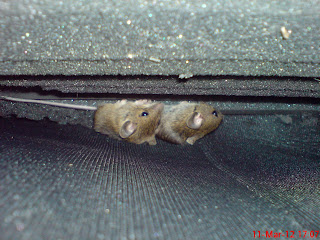 And here are the culprit's kids. I have left the case open on the garage floor in the hope that Charlie Mouse will come back for her kids and then they will all bugger off overnight and I'll be able to assess the full extent of the damage tomorrow.
Posted by Zzzzzz at 18:46