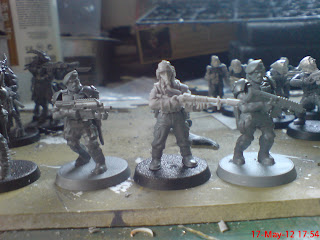 The two guys in berets are GW Canadians with defiance games arms and legs.  Those bases are the defiance ones as well.  Very impressed with the defiance models.  The wargames factory greatcoat troopers were one thing; these are a country mile ahead.  The realistic arms look a bit odd on the Cadian torso; only careful positioning allows a good fit, otherwise the bulk of the Cadian body armour forces the arm out at an odd angle.  One these guys (Minders for future penal squads) the gap is hidden under pultrons from the new Chimera kit.  I only bought one box, but will almost certainly find some excuse to buy more.  The Krieg guy with the tank commander's legs is supposed to be a dismounted tankie, he will be standing around with the command group eventually. He looks a little strange unpainted but I'm confident that he will blend in when he's painted. 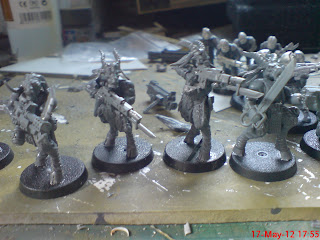 Gors in space.  Began with the Gor body and just Catachchahchahcnen arms; the Gor body is too barrel chested for a great fit so the subsequent ones are sawn off at the waist with Chechen torsos as well as arms.  I hope you can see that they are physically huge by comparison with the more normal humans.  Good foundation for a kill team, I thought. 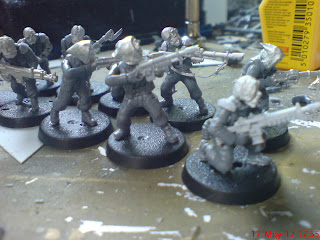 These are Warlord Games British Commandos.  They are armed with a mixture of Victoria Lamb and FW weapons.  The heads are Westwind Saxons (with and without hoods, natch).  GS-ing the cloaks will be a challenge.  These figures are more slight than even FW ones, but easily fit in, either as peasants or hivers with their low protein diets.
Posted by Zzzzzz at 08:26