Regular readers will know that I get other people to paint my armies.  My painting is not so bad that I cannot bear to look at things, but it just insn't as good as I would like.  Obviously this is due to a lack of practice, rather than a lack of talent (thank you for agreeing).  So with this in mind, I bought one of those phenominally expensive trays - if I used one of the exisiting TV Dinner lap trays I would have to clear everything off it an put it away every time I stopped painting, which sort of defeats the point. 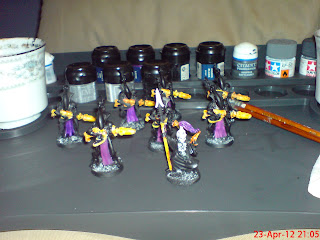 So now I have one.  And as you can see I can use it.  But as in a lot areas, good intentions are soon scuppered by real life.  Incidents by contractors have meant loooong hours at work the last two weeks and so my good habit of finding time to paint more often has already been broken. 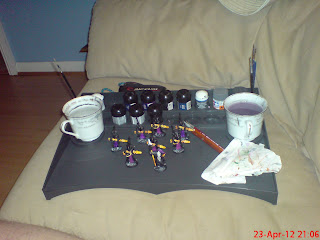 To tell the truth, whilst improving my painting skills would be nice, I don't really have the time; by which I mean that I have more meaningful and arguably important things to do with the time it would take (excersise, time with family and friends, maybe actually playing a game or switching the xbox on, ploughing through my reading list and working to actually pay for it all) to actually improve.

Moreover, if I am serious about one day stopping adding to my insane collection, then it will all be painted and I'll not have invested all that time in a skill I won't actually need any more.

Of course, all this is just cover for the real reason; I don't enjoy painting little men.  I realise that this is because my skill level doesn't produce a result I'm happy with, but quite frankly, I don't need to spend time doing this.  Anyone want a painting tray ?
Posted by Zzzzzz at 08:08