There are any number of gangs on Devos IV, largely centred around the larger cities.  These follow patterns fimilar to the Adeptus Arbites from the models found Necromunda.  Being an important Agri trade world relatively close to Hydraphur, there have been many off world influences imported to Devos IV, gang culture amongst them.

The long build up to the current state of war on the continent of Benq has been preceeded by over a century of disorder and insurrection.  On the continent of Acer, this has largely been reactionary, with vigilante gangs and private armies of the noble houses taking action where the legitimate government either could not or would not.

The most fervent are of course the Redemptionists.  The popular press, with a flipancy that belies the gravity of the situation, of course refers to them as orangedemptionists.   Perhaps the smallest faction, they are amongst the most active and most violent.  They are a fervant manifestation of the imperial cult and rejection of the standing government based in the capitol (Xyphonica).  Unfortunately, they have been kept separate by the ocean.  However, it would not be beyond the Ordo Hereticus to harness their devotion by having some potential martyrs from Devos IV involved in the liberation.

Only slightly less fervent are the Cawdor-esque workers of the food processing plants and textile works of central Acre.  Keen to demonstrate their loyalty to the emperor (to these very workers, as well as potentially any official body who may be interested), some wealthy patrons have been clandestinely supplying their workers with black market military items. 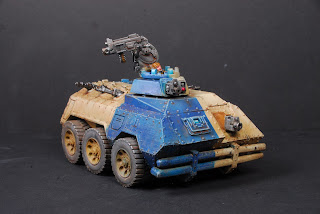 There will likely be another briefing on local gangs before you are deployed.

Paint by Mr Lee, Cawmeria by Karitas.
Posted by Zzzzzz at 11:10