How did it come to this ?


As previously described, Daniel Horpan (“Danny Bloodcoat” to his men) is the product of the same military machine as the leadership of 72AG (and indeed, almost all of the Imperial Guard within the sphere of influence of Cadia).

Daniel Horpan joined the Devos IV PDF as an officer cadet seventeen years ago.  He spent eight years within the 99th (“the Bloodcoats”) Regiment before becoming company commander.  From there he moved to Maj Gen Firth’s staff as a planning officer.  Firth, recognising his talent, despatched him to Agripinaa to serve in the Imperial Guard for a few years.  Six years later Colonel Horpan returned to command the 99th.

In the last three years, Horpan has been courted personally by Chaux Na Mrr’see herself.  She obviously thought that she might need an able military commander on her side.  Horpan is staunchly loyal to his birthworld.  Colonel-Commandant Welbhann, the commander of the 902 Inf Bde knew Horpan on Agripinaa.  Despite being from quite different backgrounds (Welbhann is from Armageddon), Welbhann believes that Horpan has somehow deluded himself that his following the creed of Chaux Na Mrr’see is in line with his loyalties as former officer of the IG and senior figure in the Devos IV PDF.

The 99th Regt were delighted to find themselves commanded by Horpan.  “Danny Bloodcoat” he is known as.  They are encouraged by his elevation to (as they see it) strategic commander of the PDF.  The creed of Chaux Na Mrr’see has become all the more popular thereby.  Such is his reputation that the 13th Mech and other formations within the PDF, as well as the militia, have ‘bought in’ to his campaign.

The leadership of the Devos IV PDF, up until four years ago, would have been described by Klestor sub sector command as professional, honourable and efficient.   The decision of General Horpan and his staff to side with heretics is difficult for outsiders to understand.  However, it is known that Chaux Na M’rrsee demanded an oath of loyalty from the PDF when she became the duly elected head of state.   Gen Horpan and his staff have simply followed their militaristic code of honour in not changing sides.

The refusal of the appointed off world Planetary Governor, Maj Gen (retd) Marcus Firth (Cadia), to accede to transfer of power to the people’s elected representative, has to be seen in the light of what was happening on Devos IV at the time.  Governor Firth quite rightly refused to relinquish power on the grounds that the High Lords had appointed him and that he had no largess to step down without their permission.  The gradual migration of power from the appointed executive to the people had been happening for years, in the end, the people simply voted for what they wanted; As Devos IV had given no cause for any alarm at all for hundreds of years, Governor Firth had no significant internal security apparatus with which to rectify the situation; as it stood, the personnel of the PDF, members of society as a whole, are as culpable as the rest of them and either largely on the side of (or most apathetic to) “progress”.

Eventually one of the Adeptas Sororitas sponsored shrines realised that the events happening were tantamount to heresy.  They astrapathically asked for assistance just before Governor Firth was deposed by Chaux Na M’rrsee.   The Cadian 144th Long Range Recce Regt was travelling though the system (from Hydraphur back to Cadia to recruit and refit) and deployed to the surface[1].  The Cadians soon found themselves corralled in the Wizelvard area by the PDF on the orders of Chaux Na M’rrsee.  Their reaction was to send out clandestine Kill Teams into Xyphonica to force resolution by direct means.

The attempts on the head of state by a (supposedly) allied military unit were perceived by the PDF as treachery.  This was a fundamental breaking of the military code of honour (albeit by off-worlders) as they saw it.  They responded by arresting the former Governor as an enemy of the state[2].  The Cadian 144th were attacked and scattered.  Nothing could now be allowed to sully the honour of the Devos IV PDF; they would remain loyal to their home world and its elected government.

Chaux Na M’rrsee seized her moment and chose that moment to cast off the Imperial yoke, the foodstuffs that were the bedrock of Devos IV’s economy would continue to be sold to the Departmento Munitorium, but on a basis that would ensure improving standards of living across the planet.   The PDF was renamed the PLA[3] and Chaux Na M’rrsee promised Gen Horpan reinforcements for any likely military actions.

The Devos IV PDF (now PLA) had been redesigned by Gen Horpan over the last decade to fight a guerrilla war against an occupying force.  He had always assumed that this would be Xenos or a strike from either the Eye of Terror or Sabbat Worlds (both almost equidistant).  Military and civilian infrastructure projects had been carried out and tactics and positions prepared.  Within its idiom, the PLA is prepared.  The only concern that Gen Horpan has is that there is no exit strategy for the PLA, they are simply planning to (and are expected to) hang on until relieved.    Gen Horpan had always expected to be relieved by an Army from Agripinaa, not defending against one.   Having held posts on Agripinaa and Cadia, he knows what is coming.

So far, Gen Horpan is not impressed with the reinforcements that  Chaux Na M’rrsee as arranged; Orks and mutants from the San Cantor Ash Wastes may indeed be children of Devos IV, they may well be good in a fight, there may well be mutual respect and understanding between them and some of the PLA units from the same region.  But by engaging Scavvies and Ork mercenaries, Chaux Na M’rrsee has crossed a line that incontrovertibly puts her, her government and the PLA, beyond the mercy of the Imperium. 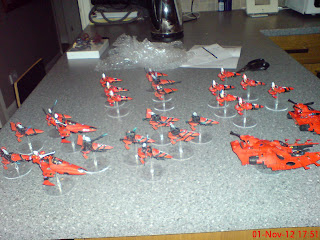 The Astartes Intervention is presented to the population of Benq as just that; Three or more Chapters of the Adpetus Astartes support the government of Chaux Na M’rrsee as legitimate, after all, the demands of Chaux Na M’rrsee’s government amount to no more than fair and adequate recompense for goods that they fully intend to continue to supply.  The PLA and the population are encouraged and emboldened by the arrival by allies[4] who some see as evidence of the Emperor’s favour.

One of the first events to occur after these allies landed was an attack by the perfidious Eldar.  Scarlet jetbikes and their supporting units attacked the capital city and were fought off by the Space Marines.[5]  Already the legendary levels of protection afforded the common folk of the Imperium by the Astartes were being demonstrated.   Remembering the attack by these same Eldar on the Preatorian Garrison of the system defences on Devos XII; this event immediately becomes a huge boost to morale for both the PLA and the civilian population.

General Horpan and those of his staff who have also previously served on Cadia, however, recognise the scions of the third, twelfth and seventeenth legions[6].  But they are now busy conducting a fighting withdrawal across Benq.  They are damned by their leadership’s consorting with Xenos and Heretics.  They have little choice but to carry on.
[1] At the time of its deployment in support of the Ordo Hereticus on Devos IV, the Cadian 144th had been on campaign for seven years and had an overall strength of approximately seven hundred.
[2] On the orders of Apochrypha Quinelle, a known heretic (Beta level psyker) and Chaux Na M’rrsee’s deputy.
[3] People’s Libertine Army – a reference to the increase in civil freedom allowed by Chaux Na M’rrsee’s administration.
[4] These forces were almost certainly landed by the Hexognome (before its destruction) and the Tyrant’s Claw whilst the bulk of the Imperial Fleet was out of system.
[5] Inquisitorial agents report that the Eldar were attacking the purple space marines exclusively, not the city or any of the scarlet or burgundy space marines.
[6] The Emperor’s Children, World Eaters and Word Bearers.  Aside from Danny Bloodcoat and half a dozen officers on his staff, no-one else has ever seen a Space Marine in the flesh before.  Here the great enemy’s main weapon is not so much deliberate deception as just letting people make their own assumptions and not correcting them.
Posted by Zzzzzz at 08:43