I ought to say that whatever my own opinion, these things are done and they exist and people will use them and they will pass into canon (the Avenger is an ancient design that has been in use since the Great Crusade - who knew ?)  So then, my rant:

Aside from rules inconsistancies (really ?  it's toy soldiers, jus' make it up...) One of the things that bugs me is the production of models. 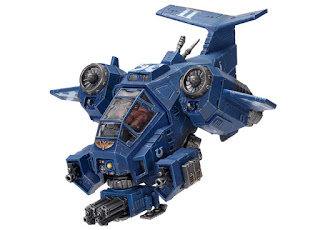 This thing is bloody ridiculous.

We know that it's supposed to be some sort of AH64 proxie.  But it is not big enough.  There are helicopters and microlights built on that scale, but they do not carry armour plating or complex, high tech, heavy (ammunition and batteries) weapon systems.  A WW1 fighter is the size of a family car - engine, pilot, MGs and an airframe.  WW2 fighters add radios, armour, better aerospace engineering, secondry weapon systems, auxillary fuel tanks, and laterly, fire suppression and radar.  They are considerably bigger.  Phantoms and Mig 21's are the size of a bus. And following through any reasonable design theory, if the vehicle is armoured, the crew don't have to be, unless they are expected to dismount or are quite likely to get de-vehicled. 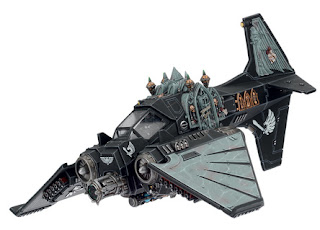 And this is no better.


That bastion of sensibility and reason, Forge World, offers us this 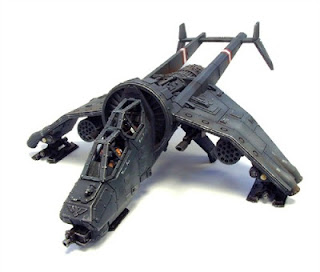 A purpose built proper gunship that looks a little bit like a reasonable airframe.  It's clearly based on an existing design (a flying chimera), with the body sacarificed for the weapons loads and guidance systems.  Good, I like this.  10 out of ten.

Then the latest IG codex ruins everything with this: 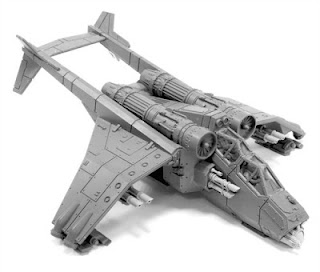 No body is going to bother with the vulture ever again because this kills everything it shoots at and carries a squad of veterans with melta (5th), plasma (6th) or Grenade Launchers (Drax).  The vendetta gives us a believable airframe and a weapons load that doesn't look like 25% of the mass of the vehicle.  Good eh ?  No.  The design notes in IA1 explicitly state that the intention is that the Valkyrie is a flying Chimera.  Which, from logical game building stand point makes absolute sense.  This is supposed  to be the Chimera for the Elysians.  End of story. 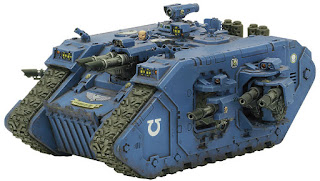 This is huge tank.  It has Eight laser cannons and no space for even a box of tic tacs because its full of capacitors to power the laser cannons.  So if space marine tech is supposed to be better than IG/Imperial Navy tech, how come the Vendetta can fly around with six Laser Cannons ?  Surely the entire body would have to be taken up with capacitors, which, let's remember weigh a lot.  When they were writing the new IG Codex, did they even have this conversation ?  If capacitor banks like that were available to the imperium of man, the Land Raider Terminus Ultra would have a troop carrying capacity (albeit of a razorback) and the IG's tanks would be better.  It almost makes you want to ask if Mr Cruddace was aware of the Vulture in FW's catalogue. 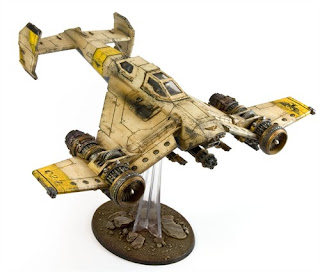 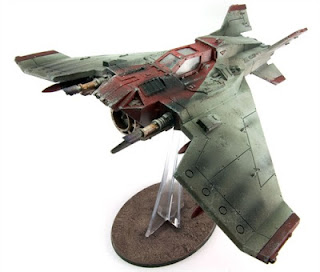 These things are just ugly.  I know that some things that fly are ugly.  But these appear to suffer similar proportional issues (wing area, wing shape and fusilage length to actaully allow the tail to fulfil some degree of aerodynamic function) to the Storm thingy.

It's only a game and I know that these are built using common parts and they are designed down to a size to fit in an army case and that these are gaming peices and so on and so on.  But if airfix, revell and so on can make model aircraft, then technical manufacturing issues should not be an excuse for things that begger the imagination.  I can suspend disbeleif to accept that the post horus heresy imperium of man is beset by Chaos Legions, space elves and space orcs.  But somehow being confronted with models that are clearly designed to fit lots of stuff onto a sprue and then into a standard sized box does sort of spoil it.

There are reasons no one mounts short range weapons on "flyers".  If anyone has ever mounted a flamethrower on an aircraft, it should be quite obvious what the results were.

And the rules.  Vulture with gatling cannons (clearly a ground attack vehicle with no air to air technology on board) vs Lightening (air superiority fighter).  The vulture is clearly going to blast the lightening from the sky with its weight of fire.  No, I don't think that 40K should be made any more complicated; but Aeronautical Imperialis has been around for a few years, why not just piggy back onto that, rather than giving us a load of stuff that isn't really much good ?

I'm not enjoying these flyers.  I'll leave you with perhaps the finest example of M39 military design: 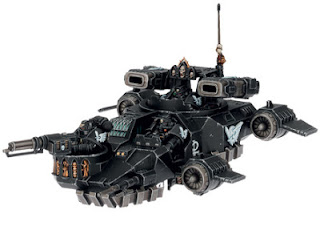