3* Gen Romos (Macragge), Commander 18 Corps, faced very little resistance at the Colil Promethium refinery.  Having a few scant hours warning, much of the high value military equipment that the PLA had there was evacuated.  The remaining forces, whilst tenacious and courageous, quickly collapsed down to a level where 18 Corps were able to move from isolated pocket to isolated pocket, hunting them down and neutralising them.

Having had a complete briefing by the 72AG's officio strategae, Gen Romos, knowing what 17 Korps has been ordered to do, releases a pair of warhounds from the Legio Astorium to support their attack. The warhounds swiftly cover the 30 kloms, outstripping their Knight Praetorian escorts, not the best of moves, as it turns out; before the battle ends, the Devos IV Chimeltavets (whose vehicles can be seen here, facing away from the rear of the wrecked Corbanian Hellhammer) were able to walk under the void sheilds and significantly damage one of the Warhounds. 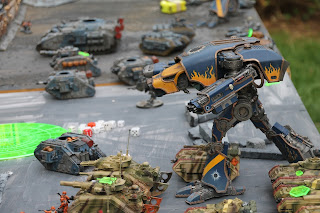 The appearance on the scene of a Warhound armed with an XR3i pattern Turbo Laser Destructor removed the Baneblade that had been damaged by the martyrs of the Corbanian Special Forces. 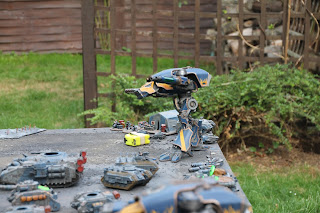 The other valiant strike by the Corbanians was into the Thudd Gun position.  They gunned down the rough riders who were there as a counter attacking force and would have destroyed the Thudd Guns as well however, they were ambushed in turn by Ogryn beserkers dosed up on 'Slaught. 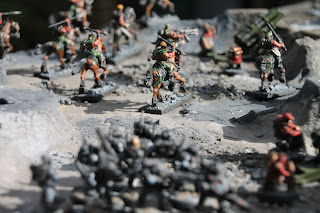 On the Northern Flank, Feldwebel Nonead and his last surviving Gibergsjeager now occupy the position where the Bloodcoats attached PBS had been.  Of their whole platoon, they are the last two to survive the murderous curtain of mortar and heavy stubber fire. 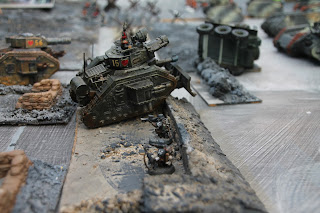 The center of the PLA's lines, reduced to ten tanks from twelve and two Baneblades.  With support from the titans, the remaining Imperial forces would be able to force and hold a breach in the 140 + Klom line of trenches, minefields and bunkers that blocked 72AG's line of advance towards Xyphonica. 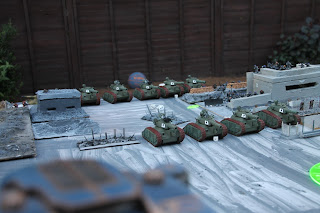 One thing that the Corbanian's are thankful for is that Gen Zhukov immediately puts Gen Pallumgski up for promotion out of 17 Korps and the Departmento immediately reassigns him to the ongoing Sabbat Crusade.  Every cloud has a medal dangling from it somewhere.

The Ogryn's dosed up on 'slaught tore into the Corbanian storm troopers.  The 'Zerker Ogryn leader with the power weapon accounted for six of them with his charge alone.  However, comma, the chemical over stimulation slew him at the zenith of his (one combat round) military career.  Paraphrasing Helen Lovejoy; "Will no-one think of the Ogryn ?" I think it's criminal that these metal and resin simple folk are being abused by both sides in this terrible conflict.

On an only slightly less frivolous note, the shite GCSE proof reading and sense checking of GWs products has even reached BOLS.  An author, either as a conceit or for valid dramatic or story arc preserving reason, might write a story as end, beginning, middle.  Or middle, end, beginning.  Which ever; the point is that if Osprey or Simon Shama did it, it would make no sense due to the nature of the subject and the manner in which the writings are likely to be accessed.  Nice one GW, everyone thought you uncommonly avaricious, now they think you are incompetent as well.
Posted by Zzzzzz at 18:46