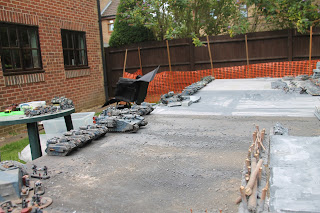 The Corbanians begin their armoured thrust on the southern edge of the minefield gap. 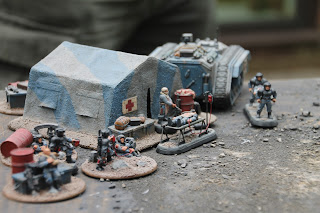 Well used to their Vostroyan Divisional Commander, the Corbanians move their RAP as close to the front lines as they dare. 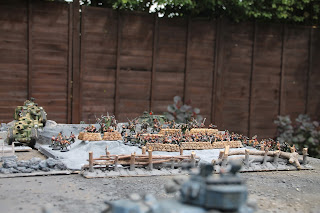 The view from the Corbanian spearhead towards the formidable defences that they have been ordered to attack. 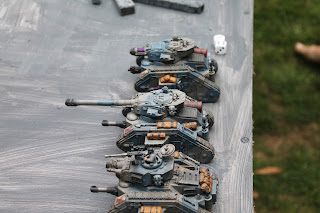 Three of Col Corbane's superbly finished tanks.  Photos do not do his army justice.  If you ever get the chance to see his medical section up close, do, they are wonderfully well finished.
902 Div lend their support to the Corbanian attack.  The Armageddon 22nd Armd Regt push forward into the gap. 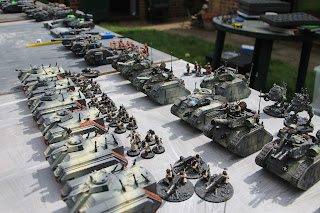 Armageddon Steel Legion support platoons dismount in no-mans-land.  Doctrines which work against Orks in ash wastes would see the support platoons wiped out before their firepower could achieve anything for the Imperial Guard.

Since we did this, I've bought the new Apocalypse book; like my opinions of the new codecies, this is a well produced and well illustrated book.  But there is just a whole lot of repetition; most of those superheavies are the same thing with just one of every gun combination the kit can make.  Fine but did they all need a datasheet ?  And the contradictory hyperbole gives me the impression that it wasn't proof read.  The little passage about the storm lord makes no sense.  Is it designed to take a platoon through a firestorm or not ?  And what kind of update is this supposed to be ?  Are the datasheets from the 'web and the older book and reload now invalid ?  It's eye candy, but could have done with a little middle-school project quality control.

Further update:  I won a prize !  From the Mordian 7th.  Watch this space.  Not this one, but one like it, probably sometime at the beginning of November...
Posted by Zzzzzz at 18:02