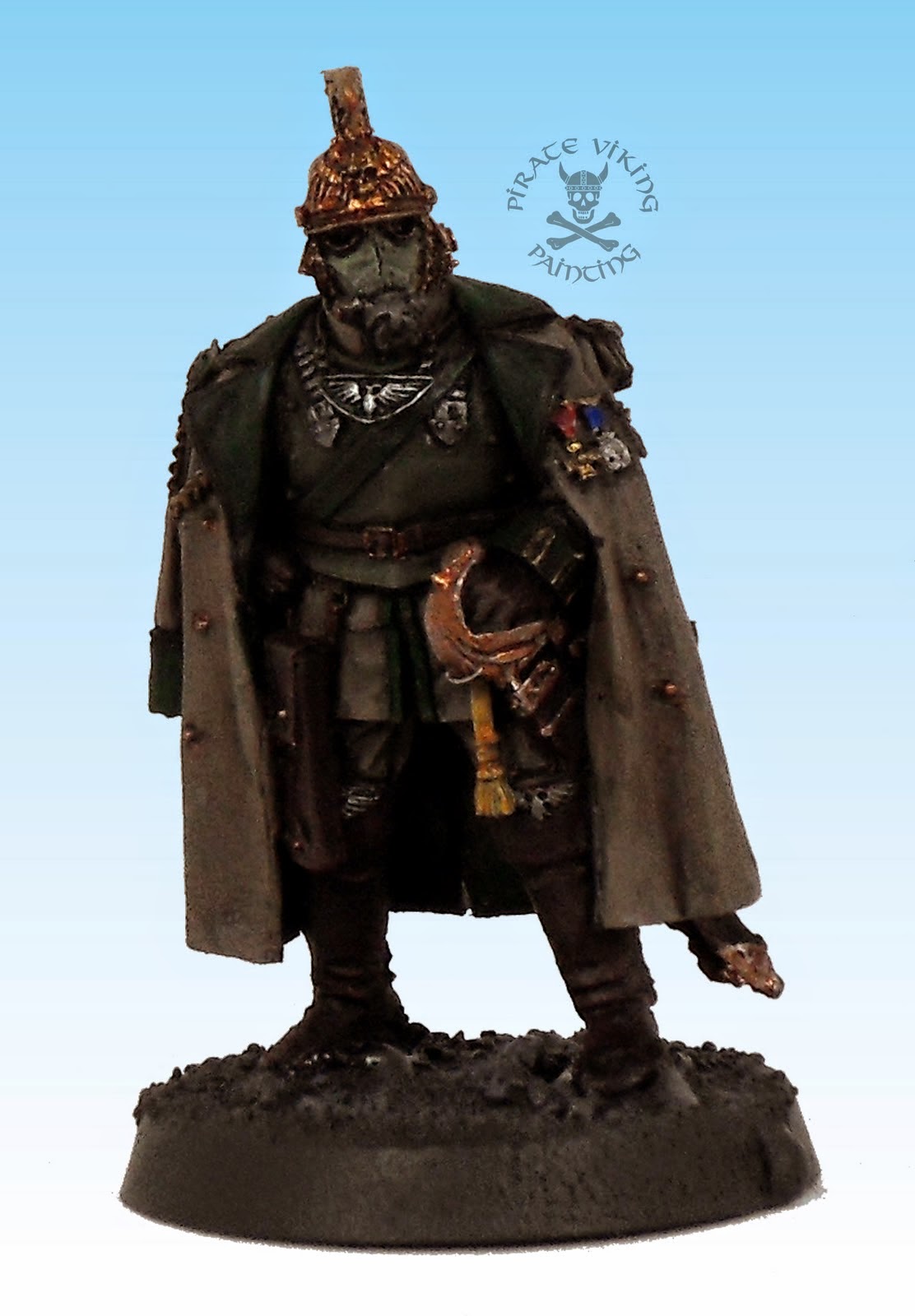 114 Coy Cdr Sturmbannfuhrer Erwin Boelcke.  Sturmbannfuhrer Boelcke was 19 Armd Regt's 2iC until his predecessor was slain in an ambush whilst on reconnaissance near the town of Guinvar.  Boelcke stepped down from his regimental appointment to lead 114 Coy.   He has done this to ensure effective leadership of the mechanised infantry element of 19 Armd Regt; he exhibits all of the usual traits one might associate with a Krieg Officer, coupled with an understanding of mechanised warfare and a dash of verve that has seen him patched up (resuscitated twice) and returned to the front many times. 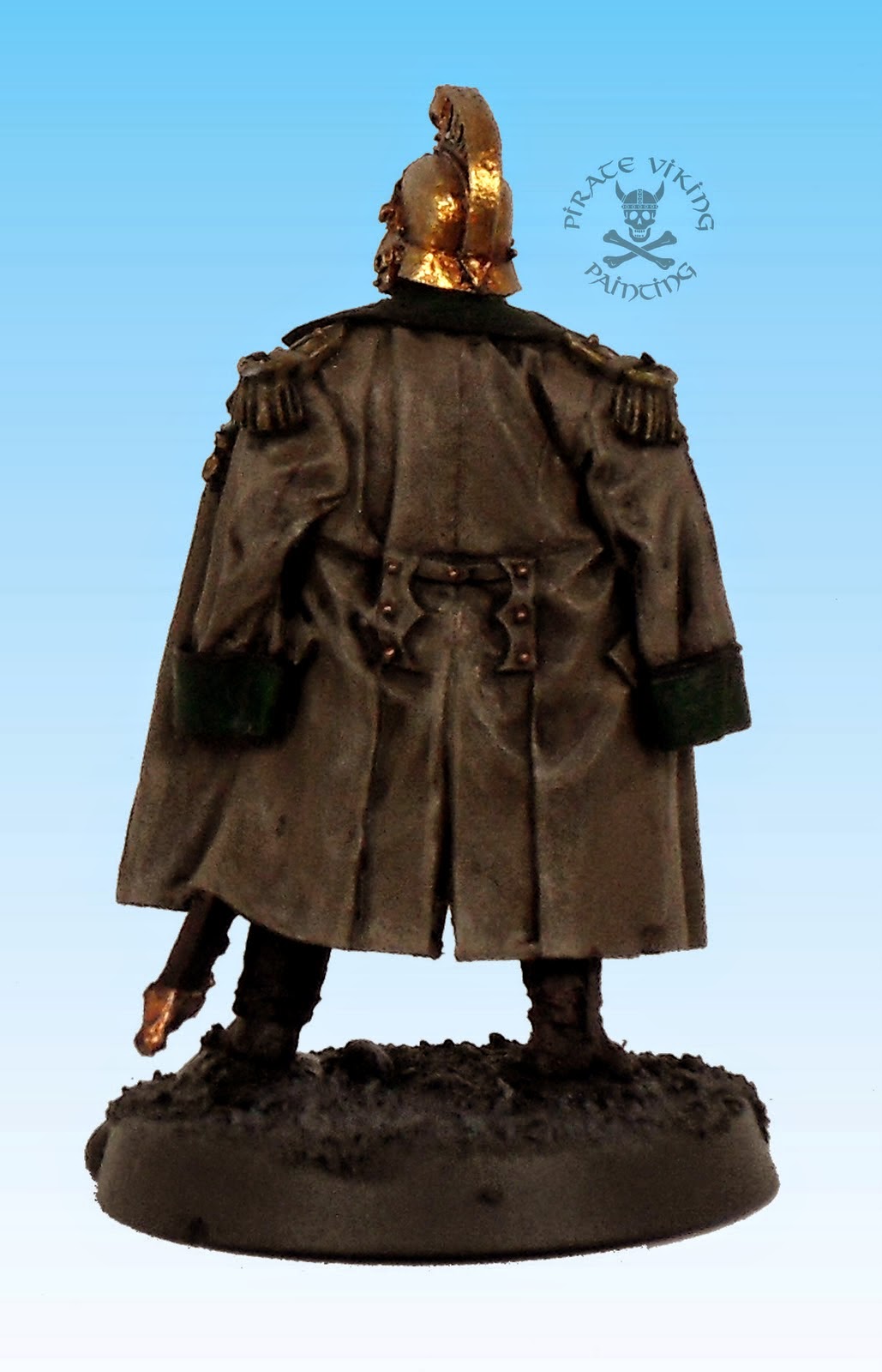 Boelcke has seen decades of service and during one long furlough on Gudrun, discovered apiary.  He now devotes such leisure time as he has to its study - he has no expectation that has a 'dead man walking' he will ever see a hive again, but finds it gives him the mental space to return to his duties focussed and refreshed.  His other predilection are the two Krieg maidens who are his 'body guards'.  This has been overlooked in light of his proficiency in mechanised warfare, not many Krieg officers accumulate as much experience in Chimera operations. 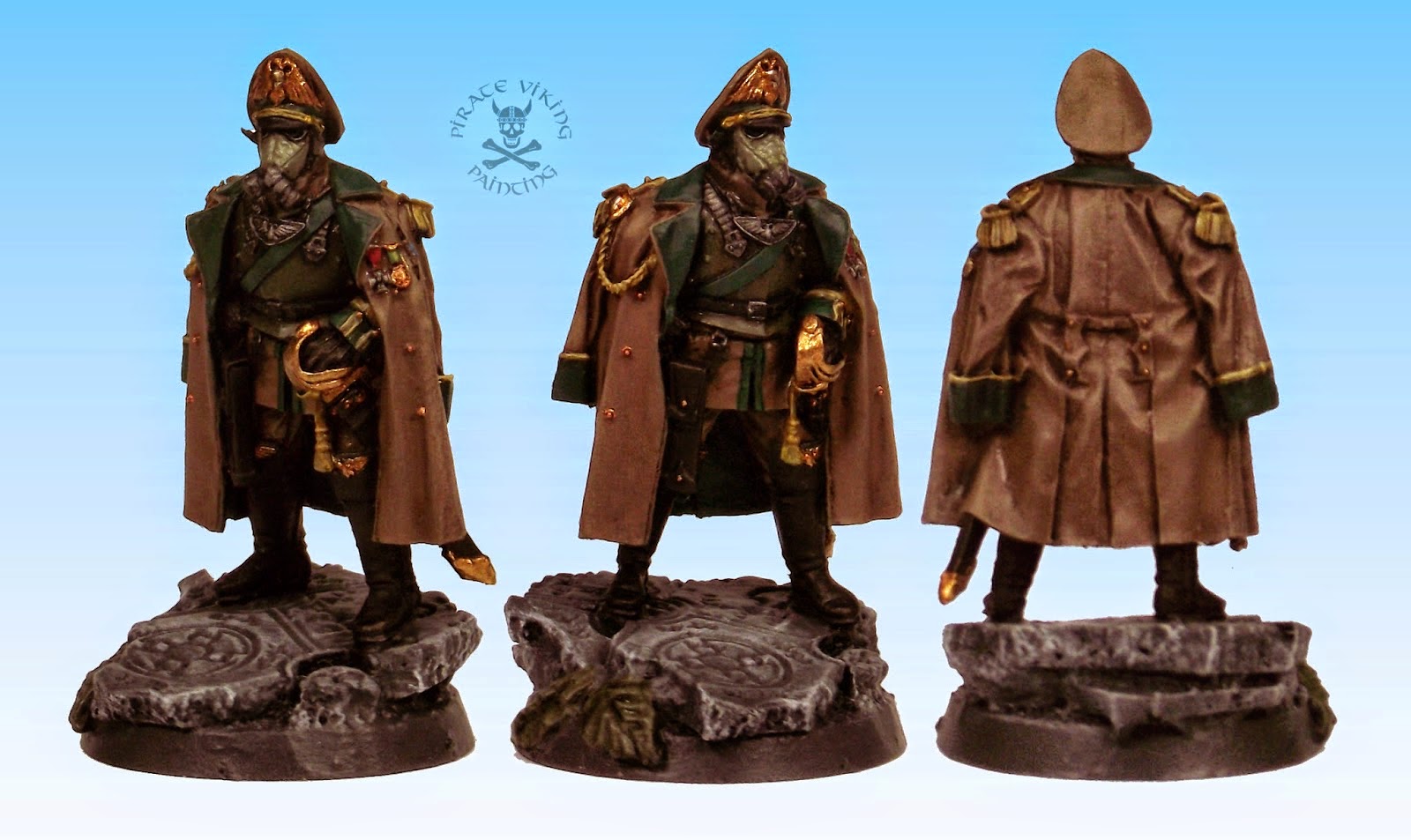 Generalmajor Caulk Resnick is the regimental commander of 20 Armd Regt.  Unusually for a Krieg Officer he will find a way to keep his men alive and panzers running if he can.  Primarily this is seen as pragmatism - after all, you cannot win a battle if you are already dead.  But he has previously been mentored by a Kasarkin tutor when he was a Grenadier.  Whilst perfectly at ease with the concept of self sacrifice (who on Kreig isn't ?), the benefits of strategies and tactics that did not involve outright attrition were an eye opener for Resnick.  He has done well to disguise his humanitarian streak and still rise to a regimental command in the Death Korps.

Resnick is quietly proficient where Boelcke is demonstrative, but that does not mean he lacks passion, he is supremely calm in the face of adversity and continues to inspire those around him and exercise effective command.  After so long fighting the emperor's wars, Resnick appreciates the opportunities to eat well and live in a degree of comfort where ever this can be found.  Whilst he is pleased with the provisions made for officers in an army led by Vostroyans, he nonetheless finds their comparative lack of focus on objectives and war aims to be a tad amateurish. 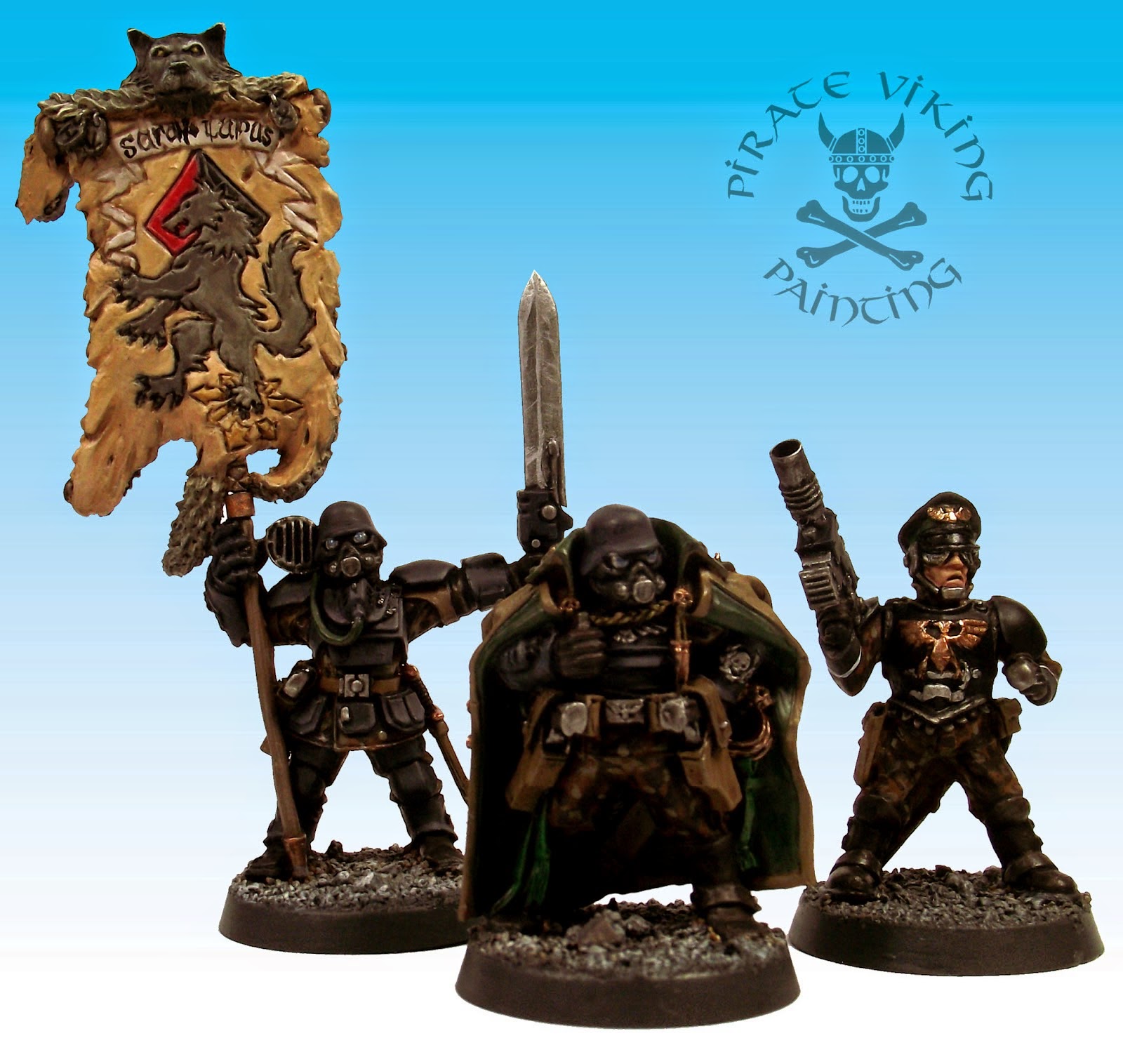 Von Kreed is viewed by his men as something of a tactical genius; whether through skill, guile, tactical acumen or sheer luck, his record is an almost unblemished list of successes.  On a personal level he is curt and somewhat reserved, which fits in well with his Kreig contemparies in 902 Div.  He may look like an aging doorman or retired pugilist, but he has the manners of a schoolmaster.  Von Kreed likes working for General Commandant Welbahnn as he recognises Welbahnn's capability to use the assets in his Division to best effect.  He could have ended up with a Vostroyan Commander who failed to appreciated the capacities of the Gibersjeagers and squandered their strength in the trenches. 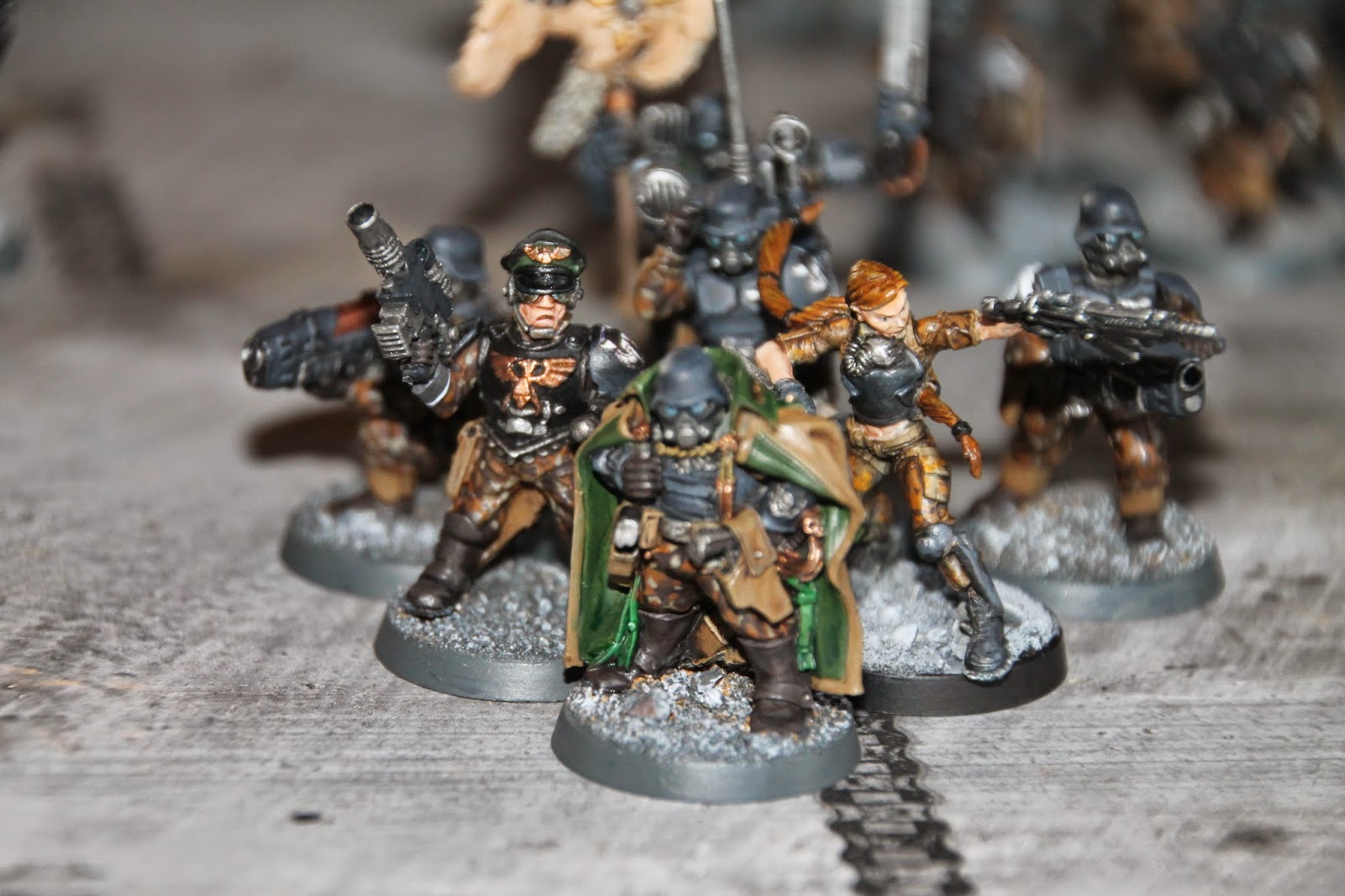 Unteroffizer Krell is a bombastic bully the like of which gets weeded out of most military units as detrimental to overall performance.  However, he is utterly devoted to Von Kreed and only moves at his leader's nod.  As a right hand man, Krell is without conscience or scruple. He is, quite simply a tool in Von Kreed's hand, albeit in human form.  Krell likes bare knuckle fighting and being intimidating.

Commissar Starling is a firm adherent to the Imperial Creed.  Whilst he would not shy away from sanctioning any of the Saranians, he believes that a greater part of his function is to lead from the front and by personal example.  He is immensely brave and this and his ability in close combat are respected even by Krell.  He like progressive jazz, sour foods, samba dancing and slapstick humour.
Posted by Zzzzzz at 10:59