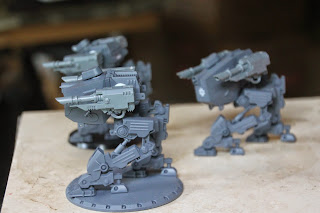 These are dust models.  I had been pondering about some form of axle running through the body of the beast onto which I would then mount the weapons.  But of course eventually I realised that I could just use magnets and then be able to swap out the weapons. 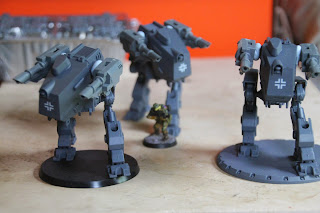 Anyway, I thought that these would make for pretty good 'counts as' armoured sentinels.  Once again Sgt Kwiz provides a sense of scale.  Good work Sgt.  He says that being a photographic model beats a combat drop 9 times out of 10.  Not a complete idiot then.

The purpose of an armoured sentinel has to be something that the infantry it supports cannot manage on their own.  In the open, armoured cars with TL Las cannons, Las cannon armed Tauros and other tanks can take on enemy armour.  The infantry themselves can take on enemy footsloggers.  So the purpose of a sentinel is to carry what an infantry team cannot into places where conventional vehicles cannot go.  That's it.  In any other situation, the resources involved in keeping a walking machine working make them not worth it.  More on this later. 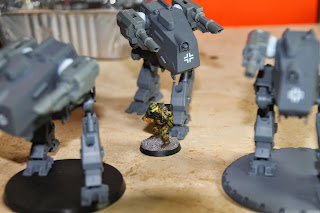 So these will go to the Saranians, like the Kielerkopf APCs and eventually be finished in the ambush colourscheme.

The ASL already have a detachment of Armoured Sentinels and another three (numbers 9, 10 & 11) are in the boxes...

And why do 902 Div's recce specialists need this level of AT ?