You may remember this man from here.

But this is Moss Trooper Doak coloured in.  A platoon of six rifle quads and a command team were coloured by Mr Lee. Yep; he did all of that tartan, as well as the DKK QM at the bottom of the post. 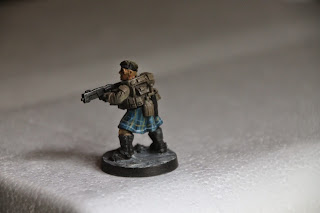 Moss Trooper Doak wears the traditional kilt and Tam’o’shanter of the Drookian disporia scattered throughout the Imperium.  He wears a locally manufactured Flak vest with a body rig carrying his ammunition and personal equipment.  He is armed with the locally manufactured (Hydraphur) G44 assault rifle, a small calibre auto gun with a high rate of fire.  The G44 can be equipped with a standard IG Kantrel pattern bayonet, probably scoured from 72 Army Groups stocks.  Additionally he carries a canteen and additional knife as a part of his belt kit. 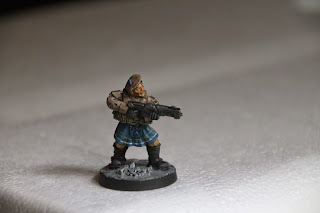 Click the pics for a better view; these are Vicky Lamb kilts and swedes with Pig Iron bodies.  The  extra canteen and knife are there to visually tie the torso to the legs as without these, the mini looked distinctly like two random bits, one sat on top of the other.  With these items bridging the gap, Moss Trooper Doak looks a lot more like a single entity, rather than a victim of some vaudeville magician. 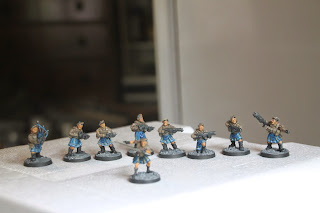 The most popular way to escape Drook is as a member of the Imperial Guard during one of the foundings made by the Departmento as a part of the planetary tithe.  Drook has as a complex ecosystem and the planetary governor knows this and sponsors groups who profess a wish to emigrate away from Drook during periods between tithes.  Many of these groups volunteer themselves to join Departmento labour or construction organisations; further reducing their costs in exchange for a period of indentured service.

Post imperial service, bands of Drookian diaspora can travel quite widely, offering their skills, expertise and manpower, often for several generations, before settling.  Depending on the amount and attitude of the new blood joining the group from the populations through which they move, by the time they do settle, they may or may not be recognisably culturally Drookian. 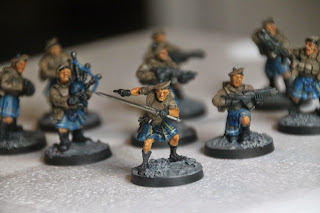 On Devos IV, Drookian civil engineers (ie everyone from detailed designers to muck shifters, approximately eight thousand working individuals and their families) were brought to the planet sixty years ago to enhance the fortifications for the system defence silos on Devos XII and the quality of the installations for the PDF, especially hardened aircraft shelters and covert runways for the aviation battalions organic to the PDF.

In the interim years, they stayed[1] and have vastly improved the infrastructure on both continents, in terms of power transmission and distribution, roads, civic buildings, the spaceport and so on.  They had also become heavily involved with the mining industry, such as it is in the Devos System either operating mines themselves or in providing and servicing the requisite machinery.

Most recently they had enjoyed a late flourish of military architecture as General Horpan’s reforms saw hidden bunkers and secret ‘stay-behind’ military supply caches being built.  With the souring of relations with the wider Imperium, these contracts dried up and the vast majority of these people, itinerant navvies and machine operators, have found themselves stranded on Devos IV.

The Departmento Munitorium, in response to 4* General Zukhov’s demands for a larger army has sent Comptroller Bellormus to Devos IV with a mandate from Spinward Command to raise four new regiments for the Imperial Guard.  These are to be the core of 72 Army Group’s 38 Korps.

Approximately 90% of the Devos IV PDF now calls itself the People’s Libertine Army and is in open rebellion against the Imperium of Man.  Those small fractions that are left professing loyalty are considered suspect by the Ordo Hereticus and thus cannot be used as a cadre to form new units around.  Comptroller Bellormus’ first stop is to the poor mining communities of Hulin (NW continental Acer) where he has successfully raised his first regiment.  As the majority of the recruits are culturally Drookian, the Departmento has been able to draw on the Drookian military heritage and the Hulin Rifles look like a Fen Guard regiment.

Further enhancing the lure of the Imperial Guard for the population of Devos IV, the Marquis of Hakysake’s son is now a subaltern in the Hulin Rifles.

Comptroller Bellormus now has a delicate balance to maintain; the whole point of the Devos IV campaign is to preserve food production for the Cadian Gate (where 99% of exports go).  With two large continents, one is about to be ravaged by war; he does not really wish to jeopardise food production from the other by stripping all of the available manpower to fight a war which will halve food production for (potentially) decades.   The rest of the units raised from Acre are not likely to have such a strong identity.

The intention at the outset is that 38 Korps will be five Divisions, each of three regiments.  Comptroller Bellormus estimates a wartime establishment of 120.000 for 38 Korps, roughly in line with 17Korps and 18 Korps.   The various Departmento Labour and Construction Corps brought to Devos IV and deployed in support of the military operation will reach 650,000 by the end of the year.
He will be lucky to raise one Division from Devos IV (in reality, from continental Acer).  His as yet unpublished plan is to start impressing bodies of the Labour and Construction Corps once the serious fighting starts.  His hope would then be that the war is won before any of these actually reach the front line; then they can be re-mobilised in their intended roles to help re-build after the war.
The Hulin Rifles, however, are under no illusions.  Theirs will be a combat role – many of them have first hand experience of the fortifications now being used by the PLA.  They have a cadre of professional soldiers drawn from across 72AG to train and lead them.  Morale is high, readiness is improving as more resources as being made available for their preparation.   Training grounds used by the DKK a year ago now reel to the sound of the bagpipes.

These people are naturally tough, independently minded and loyal.  Well led, well trained and well equipped, they are going to be the shining star of Comptroller Bellormus’ recruitment programme.  He can only hope that what follows lives up to high standard that these recruits will be setting.

Additionally, the QMG for 262 Regt has arrived at Fort Nuttar.  He is trying to persuade firstly his own Divisional HQ and then 17 Korps HQ to Lobby 72AG to release the AT ATs back down the chain of command to enable his (siege) regiment to keep pace with the rest of the Division. 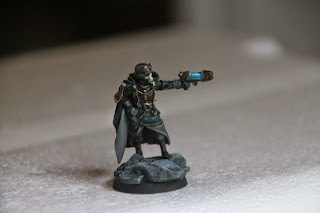 The Vostroyan's have managed to ship a number of these unusual vehicle to Devos IV despite their not being on Comptrollor Bellormus' manifest.  There are no undeployed Vostroyan Infantry units to use these giant metal beasts, hence QMG Starke's "speculative request".

The wheels of the Army Group staff move very slowly, so we will have to wait to see if he succeeds.


[1] ie could not afford to a hire a transport large enough to lift their population to another world that wanted them; Their normal MO would be for small groups or individuals to travel off world looking for opportunities and then send for the rest of their kin when a viable opportunity presented itself.
Posted by Zzzzzz at 10:37