2nd (Devos IV) Infantry Division is formed around a nucleus of battalions locally recruited.  The Hulin Rifles, recruited almost exclusively from Drookian expatria and formed around a cadre of Palladian and Mordian officers and NCOs, have already been mentioned.

The 42nd “Helgedad”[1] VV Regt is actually an offshoot of the militia raised in the South Eastern Aglov region of Acer.  Originally a response to the separatist rebels on Benq, the militia was a religiously motivated self-defence force.   Attached to the local policing authorities (sponsored by the local agrarian oligarchs) the various parts of the militias were branded as Special Purpose Mobile Units.

The Special Purpose Mobile Units were organised into platoons and given public order, area search and basic FIBUA training.  With the realisation of the undeclared war on their planet, they began to take themselves more seriously, upping their recruitment and becoming involved in the campaign to make continental Acre safe for loyalists.  Perhaps because they were drawn in contingents from numerous districts, with differing levels of training, they demonstrated a wide spectrum of capabilities and qualities.

Some were amongst the toughest and most professional loyalist forces whilst others proved abusive or unprofessional (leading to a number of ‘friendly fire’ incidents).  Fortunately the blame for the worst behaviours was able to be posthumously assigned to Col Omon, who was almost certainly not to blame for the vast number of mistakes, crimes and failures attributed to him. 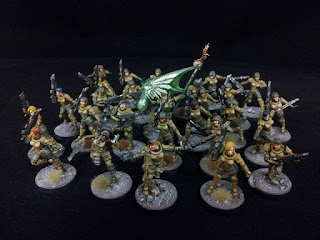 The Valhallans, recently put through a three year Cadian all arms training programme themselves, set to their training task with aplomb. The Valhallans (and their linguistic cousins the Vostroyans, who run 72AG[2]) refer to 42bn as “Vnutrennye Voiska” (interior troops).  The soldiers wear a patch with “VV” surmounted by the Aqilla on their left breast pocket.  This is not visible in the pictures as it is under their body armour.

The soldiers in the pictures are wearing  6B23 body armour with rigid plates on the arms and legs.  Some are wearing the Zsh 1-2 helmet some the Kolpak 1-SB1 helmet, some are wearing a variety of soft headgear harking back to their days as independent Special Purpose Mobile Units.  It would not be unreasonable to assume that these individuals are veterans of the pre-war armed uprisings.  They are armed with the Arakan pattern[3] AN 77 auto rifle and AN 48 auto pistol.  Many of them are carrying demolition charges.   The NCOs are carrying locally manufactured[4] chainswords.


[1] Helgedad is small city, the provincial capital of the Aglov region.
[2] The Commander of 72AG and his Corps Commanders are Vostroyan.
[3] Comptroller Bellormus’ efforts to supply 72AG have resulted in a glut of weaponry, allowing the staff of 72AG to ensure that small arms natures are common to large formations.
[4] Made on Devos IV, quite possibly on Benq before the schism.
Posted by Zzzzzz at 09:32