The camo Cadians (that's what it says on the cardboard KR case) have been posted before.  But they have recently been reinforced, with newly painted comrades arriving from Raven's Nest Painting. Sorry about the slightly dodgy photos, but's winter and hence quite dark in the garage, even in the early afternoon. 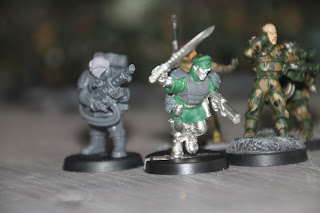 The Straken conversion from Catachen to Cadian has been superbly done by Col Gravis.  The hellgun armed bodyguard already has a painted up buddy. 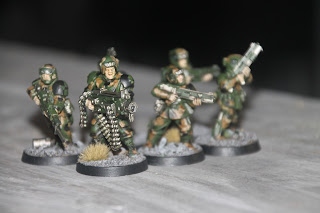 Here, with the FW shotgun vets, is the Cadian-ised Sgt Harker that Col Gravis also customised.  They may not be able to be Grenadiers with him around, but I don't see that as being a problem. 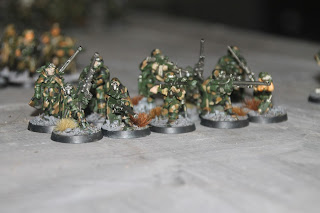 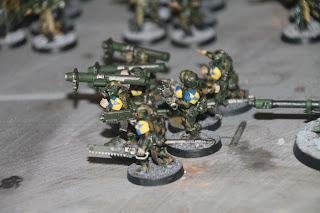 Also present are the two squads of AA missiles, designated by their blue and yellow shoulder pads. 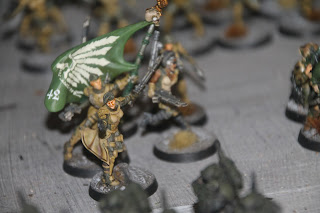 And I put the 42VV Regiment girls out as well. 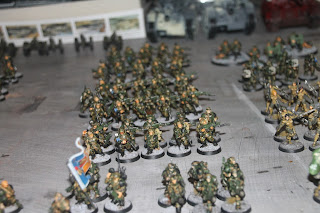 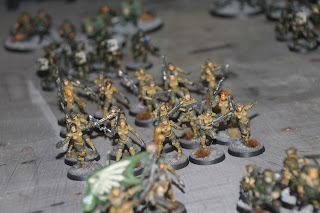 There are only two squads from the 24VV Regiment's contribution to the war effort here.  The TGG girls are great, but look like they are seriously flouncing, rather than seriously soldiering.  But when you look this good, who cares ?

In terms of 'progress' this represents a reasonable slice. And pushes little men on 25mm bases over the 1000 mark.  The camo Cadians have four command squads - in points terms this is a CCS, a spare CCS and the two PCSs.  But the plethora of banners could allow me to show various units of 72AG all using the same figures, giving the army a veneer of commonality.

Anyway, I've done a little cogitating about the Astra Militarum, so if you enjoy my expositions into how the Grimdark works, there's another one of these coming up soon.
Posted by Zzzzzz at 10:10