So this is another 'fail' according to 'the rules'.  I was browsing ebay (why do I keep doing this ?!?!) and found these RTB Imperial Army figures for a reasonable price, I think I went in £10 under the suggested price with a 'by it now' bid and made the purchase more or less straight away.

This will translate into two more squads for the unit, which will bolster the forces of freedom and independence at smidgeon. Of course, like other pre-loved things on ebay, they are eclectically attired and somewhat the worst for wear. 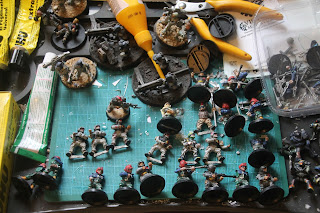 Fortunately, I have some RTB era las-guns that I have been saving since 1986.  No, really, I have.  So armed with some weapons and some arms, I can restore these fine fellows to completeness and then set about re-painting them. 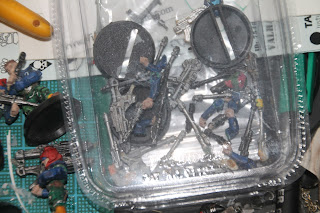 And here are some I prepared earlier...  Three las cannon teams (which will have to be re-based to 60mm) and two Heavy Bolter teams.  I think there's still enough bits to do another las cannon team, which might be useful at some point. 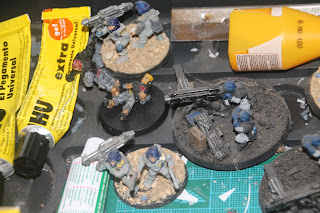