Well, that was a mistake.

I joined a military modelling graveyard (trading page) on Facebook.  Whilst this does not sound like a disaster, it did prove to be a bit naughty in that I ended up breaking my rules of procurement.  I actually only brought a book through it.  A book about tanks for $5US.

But, seeing all of those models there ("Will only ship to continental US" cropped up a bit too often, but you can't have everything...) inspired me to fish around for the bits to do another project which has really inspired me.

But the 'bits', ie suitable (perhaps 1/48th ?) kits at the right price (a kit on offer for $10US sounds good, but if the postage is another $15US, then a kit from a UK supplier for £18 is a winner...) meant that I wound up sourcing the kits from UK suppliers.  Which in turn meant that I could get two, so that there would be two of these lovely fliers for when I wanted them. 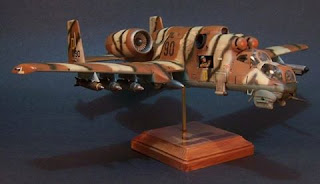 So, instead of a bargain I wound up buying two lots of suitable donor kits.  Broken rules are still broken rules even when the kits are at a reasonable price.

Far worse was joining the 'Death Korps of Krieg' trading page.  Obviously this was almost immediately a disaster.  I've left that group as well, but only after squandering an insensible amount.


There is stuff here in it's raw, virginal, untouched state.  And some stuff which needs an awful lot of TLC.  There's possibly half of the (needing a new uniform) riflemen needing over half of their rifles repaired.  I didn't need any of this, it was just there at the right price.  Appalling decision making on my part - tut tut, should know better at your age, Zzzzz.  So the new stuff was ok priced but came from Sweden, so postage, although not outragous, but was still a cost.  And the other stuff, prepaid, was collected and turns out to need repair (although that Vanquisher needs no work, I'm keeping it).

So I'm now keeping away from interest-cum-trading sites on social media.  Hopefully this me actually learning from experience.  It's bloody taken long enough.