The Eastern Edge of the City.

VI Corps (half of 3422 Army Group[1]) has the SE quarter of Xyphonica as its TAOR.  The three Divisions of VI Corps are tank heavy armoured formations.  All three are notably light on infantry[2] and one, 65 Division has no dismounted infantry.  All of VI Corps fighting power is ideally suited to the rolling prairie, but not ideal for urban assault.   Such are the vagaries of trying to adequately or properly resource wars via the warp. 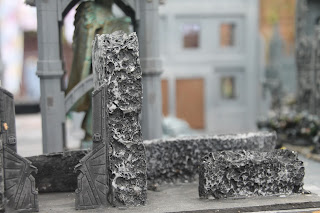 The newly promoted Chief of Land Warfare (Plenipotantiate in charge of the execution of the war), 3* General Mantufor[3], fully understands the risks and just plain awkwardness and difficulty that VI Corps will face when trying to adequately contribute[4] to the attack on Xyphonica.  However, in order to continue the campaign to a successful conclusion, he cannot allow VI Corps to sit on the edge of the city and wait for the fat lady to clear her throat[5].  VI Corps does have to work its way into the city.

However, in order to preserve the fighting power of VI Corps, as it is likely to be needed again and squandering its armoured might on a swift advance in to the city makes no sense on a strategic level and as long as pressure is maintained, would serve no practical purpose[6].  The Corps of 72AG[7] have been in place on the western edges of the city have been in place for six weeks longer[8] and have a much larger infantry[9] to armour ratio.  XXXXIV Corps (the other half of 3422 AG) also has a larger infantry to armour ratio, but still less than the component elements of  72AG[10][11][12][13]. 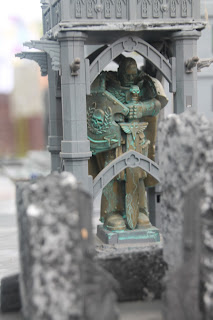 What 3422 AG will do is to systematically, district by district, street by street, building by building, reduce the city to ground level in order to minimise risk to the armour.  Effectively, 3422 AG is not expected to make progress into the city at the same speed as 72AG will[14][15] from their start positions on the other side of the city.

The Macharian Thunder Guard[16] have been withdrawn from XVIII Corps to patrol the prairie to the north of the city, it is suspected that any breakout may well be made in that direction.  Sub units of the Thunder Guard, reinforced by the entire Death Rider contingents from DKK 143rd and 262nd Regts[17], are to cover as much ground as possible looking for individuals and small groups who may be indicators of an increasing exodus of beaten heretics trying to escape their final doom.

Following their regular War Councils[18], the other Plenipotentiates, sensing that the endgame may be near, see an opportunity to gain prestige from being involved by making an offer which is unlikely to be refused.  The footsoldiers of sworn bands of the Frateris Militia and the Sororitas Militia[19], encouraged by the small but very influential Eclesisatical and Adeptus Sororitas delegations[20] whose respective heads are members of the War Council, volunteer  to go to war[21].

Gen Mantufor, mindful of the risk posed to VI Corps by their paucity of infantry assets, agrees to their inclusion on the condition that the bands agree to place themselves formally into the proper military chain of command.  The officers of the Imperial Guard are under no illusions; they realise that the militias are likely to break ranks once they have enough provocation.  However, all the while they are there, they will provide an additional level of protection.

As soon as VI Corps assets reach their start line, they are joined by the militias[22].  As soon as they are not being actively supervised by a part of the Imperial Guard, the militias revert to lounging around and not behaving in a particularly soldierly manner.  They tend to travel around as a mob or pack, not taking piquet duties seriously (to the military mind), indulging in un planned and unsanctioned soirees beyond the FLOT and sometimes not holding what their assigned Division had told them was their front line.

The militias on the rebel side[23][24] have been under bombardment for four years and more recently faced ground assault.  Factoring in the hiatus for organising 72AG and 3422 AG and allowing them to get into place, the forces of freedom[25] have had adequate time to prepare for the coming assault[26].  The militias now assigned to VI Corps have also been at war for four years, but only actually been allowed to do more than guard rear areas now that the situation finally demands it.