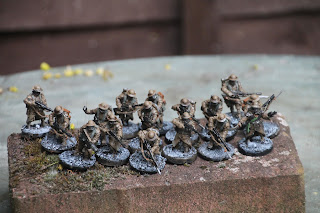 Macons prefer to live in large extended family groups; despite these families being matriarchies, Macon society is rife with machismo and their attitudes to women are that they are either mothers or sex objects (either unattainable or otherwise).  Those enlisted into the PDF might be viewed to have swagger in excess of their conscript role.  Those PDF units selected for transfer to Imperial service tend to be picked for their level of enthusiasm for the Imperial Creed, rather than military role, operational readiness or any other criteria. 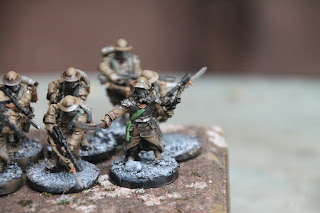 Macon civilisation has its roots in scattered fishing communities around Macharia’s bounteous oceans.  Waves of immigration and industrialisation gave rise to the society that spawned the soldier who eventually the legendary Lord Solar Macharius.  His passion and self-belief came from being a Macon; his generalship he learned later, off world. 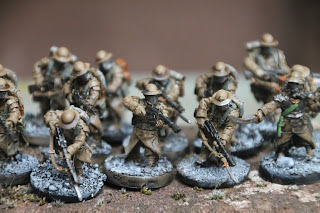 Now a shrine world, Macon’s still live in what amounts to small tribes or clans.  Now their Machismo shines from the shadow of Macharius’ shrine; the need to live up to his promise has made the religiously inclined Macon Regiments more deeply devout.  It has also encouraged them to ensure that they perform in their allotted battlefield role. 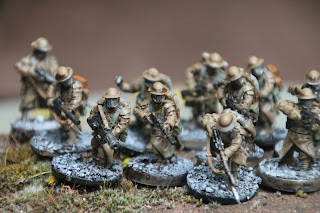 The Macharian 203rd Line Infantry were raised as six individual PDF Battalions who were the 128th mechanised infantry brigade.  When the transferred to Imperial service, they were rolled into an Astra Militarum scale regiment and re-numbered as their (re-named) world’s 203rd tithed regiment.  The have spent seventy four years (slide time, only five years real or subjective time) in transit nearly getting to one war zone or another.  Devos IV is their first actual deployment – by Inquisitorial writ, they are to backfill the place in 903 Div left by the non-event of the Preatorian 5th. 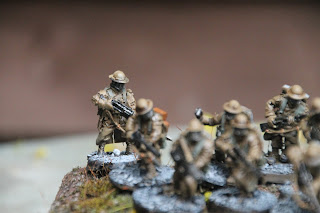 So whilst 3422AG desperately needs infantry assets, Comptroller Bellormus picks his fights wisely, this is not one which needs fighting, there are plans in place to plug that hole.  And the Inquisitorial writ is based on a clear need to bring 903 Div up to strength before the main push into Xyphonica. 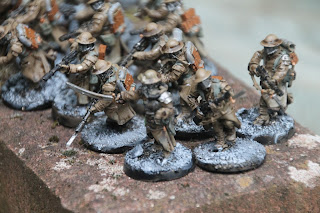 17 Korps now has two formations with unusual funerary rites. The Macons embrace, for reasons so obscure that not many Macons know why, immediate cremation of their dead.  This goes down to individual soldiers carrying small flasks of accelerant so that their comrades can fire their corpse before they are cold. There arn't many medicae in Macon units and they reserve their few heirloom flamers for their attendant Ministorium Preists. 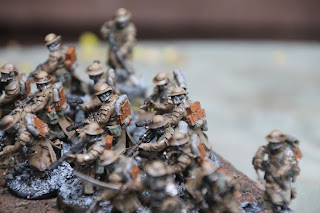 As you can imagine, this penchant for immolating their own casualties during engagements can cause consternation amongst their allies.  But it's deeply ingrained in their version of the Imperial Creed and who would dare gainsay the illustrious sons of the Glorious Lord Solar himself ? for are they not the inheritors of his military legacy ? 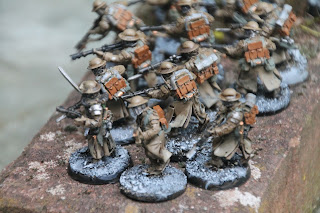 The 203rd are fresh and eager to get to grips with the enemy.   They are keen to retain their particular traditions, even here in a new war, as a part of a new army, on a new world.  It remains to be seen if their quaint tradition of setting fire to their casualties lasts that long. 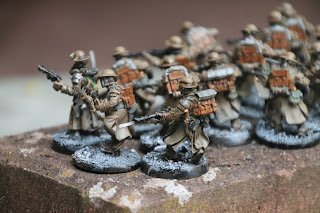 With the closed society of the Death Korps killers, who are inclined to keep their distance from everyone else; their funerary rites are  not common knowledge to the rest of the army.  With their historical connection to one of the heroes of the Imperium and innate cultural swagger, the Macons are a lot more convivial.  There is a chance that the unusual habit of a famous high profile might influence others.  72AG would not want the immolation of possibly live, recoverable casualties spreading.  It's not keen on such a practice as it is. 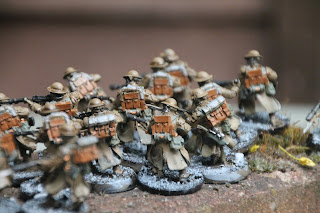 The bravado of the Macons makes them, at least now, at the beginning of the campaign, primed, trained and ready to be the shock troops of the attack on Xyphonica. 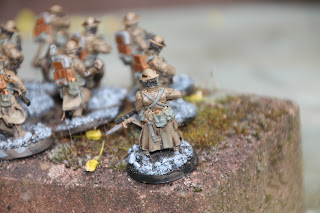 And so another 2600 souls strut onto the Devos IV stage. 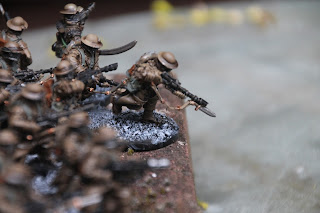 Defending the Brick of Scrutiny against all comers.
Posted by Zzzzzz at 02:21