As promised, views of the two options next to the BoS on a rainy bank holiday weekend.  I do like it when the weather behaves itself. 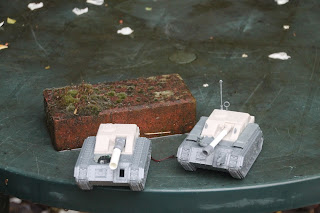 You can clearly discern the chunky and realistic options.  I had undertaken to show you the options and here they are.  What is not really illustrated here is that the three options provided by Mastercrafted (see previous post), marry up very well to two of the sizes of plastic pipe I use (10mm and 7mm).  It might be serendipity, a cynic might simply point out that when building models to a given scale, the sizes of things like weapon calibres will fall between a certain range.  But taking a second look at the designs Mastercrafted has provided, one can imagine that they were chosen to not impede scratch built modifications. 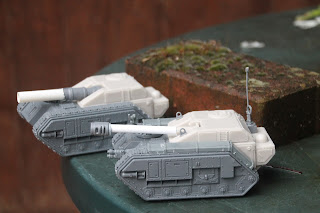 In the end, I've gone for the 7mm barrel, mounted using one of the Mastercrafted weapons, but without the battle cannon muzzle; all three are now all glued up.  I'm hoping to get some paint splashed about at some point in the near future.  First I need track guards for two of these and six other chimera chassis vehicles - I wanted the warchimera ones again, but they are OOP. 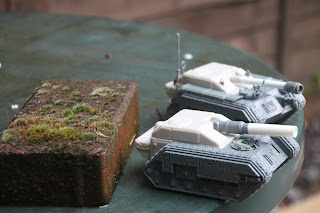 So here we have a particular take on the Chimeradon - in game terms, a battle cannon toting Salamander with an armoured cab.
Posted by Zzzzzz at 21:41