Now I'm sure a lot of you remember Col Corbane's excellent medical conversions who must have been a great comfort to the Corbanian 1st (Urban Assault) Regt.  Seen here supporting the extremely costly assault on the Cudlip Lines. 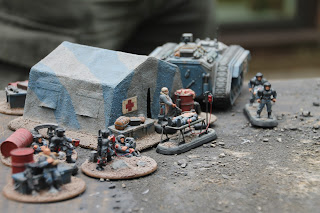 Always a joy to behold.

Who doesn't a little bit of FNP to share out amongst their iggies ?  So I thought I'd better get some medicae support for the rest of the army: 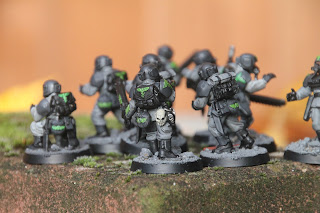 Gamely, one could just sprinkle them over the army so that they alight on platoons across their formation and satisfy the need of the rules and reminiscent of attached persons who are deployed with units for specific functions like medic, intel or signaller, where the capacity doesn't exist in the unit organically. 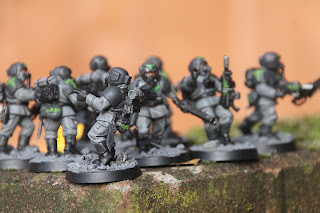 However, in my mind, these guys are in a Armoured Field Ambulance unit - so these guys with a driver would crew the army's battlefield ambulances.  Called forward by sub unit medics to retrieve casualties from the battlefield, they would then keep the casualty alive until they reached the Mobile Army Surgical Hospital, which would be staffed by Departmento Munitorium Medicae staff, rather than actual iggies, 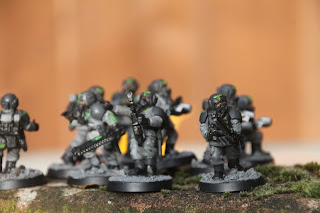 The eagle eyed amongst you may have already sussed out that there are sergeants and toilet roll wielding papier mache technicians.  So these guys are in pairs already.  Ably painted up by Admiral Drax. 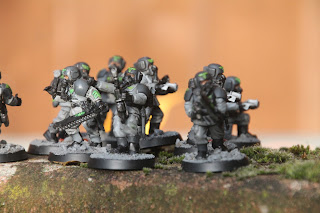 So realistically, I don't need to make a fleet of ambulances for these guys as they should be embedded in platoons to fit with the rules.  However, I may do just one.  Y'know, just to illustrate... 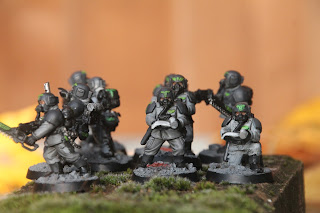