This is just a post to let you know that I'm still alive and have not forsaken the long war.   You may be familiar with my DKK panzer squadron and have seen these three individually elsewhere, but there they are together - I was re-organising some storage. 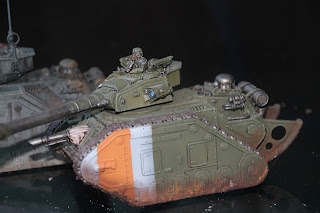 The green vanquisher is an orphan from a DKK batch from a fb DKK page a couple of years ago.  It was clearly the best piece there and one of the few which didn't need major re-working.  Now I would always do the triple stripe with equal width stripes over the first panel.  But as you can see in the photo below, the stripes are consistent both sides of the tank. 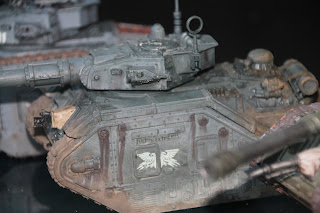 Justice Extremis is the commissar's tank from the larger grouping.  Included here for no particular reason. Although under the harsh lens of photography I can see some areas where the shading could be stronger. 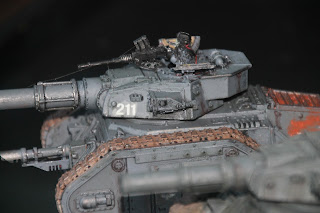 211 was another 'opportunity' which I could not resist.  However, I do now have enough random extra DKK LRMBT so no more.  Honest.  It is a Mars Alpha hull, but lacks the DKK filter system and trenching rails.  It was grey when it arrived so it basically just got the same treatment as the commissar's tank. 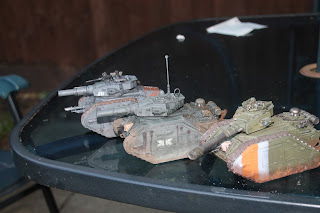 The rain streaking is from the Mig Early War Panzer kit.  If you click the pic you can see that the blue filter was more heavily applied to the commissar's tank. 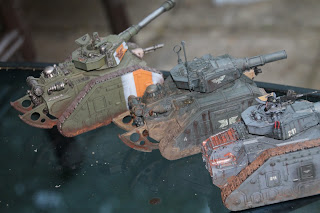 I'm thinking that perhaps hairspray and salt and then panzer grey might be the way to go with the vanquisher (?)   The number 4 on the commissar's tank is down to the DM; all assets must be accounted for and loading for interstellar traveller is going to be done (quite literally) by the numbers. 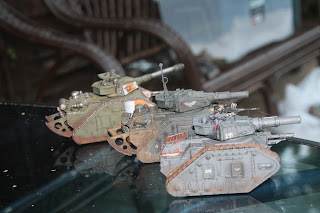 There.  Nothing new, but I'm very slowly churning through stuff in my hour and half a week hobby time.
Posted by Zzzzzz at 09:13