The Lancers meet the only real point of resistance during the whole engagement, the Ogryn. 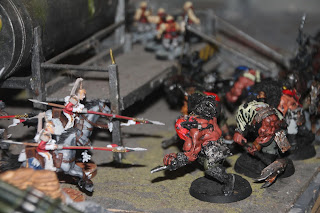 The DKK Ulhans attack the Ogryn from the other flank.  The paucity of witches on the platform above is not due to the valour of the Iggies but by their fellows being consumed by their own blasphemous majik.  (gotta love scatter dice, they took a chunk out of one DKK troop and then dealt themselves 55% casualties the next turn - "play stoopid games, win stoopid prizes"...) 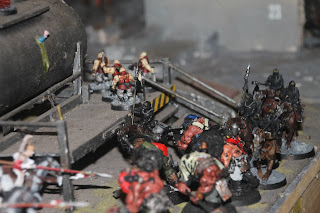 Storm Troopers from the 16th Elysian DTR tactically insert into the 'Hot LZ' (although all of the fire is being directed at the cavalry already on engaged).  Coincidentally, there is flash of warpy brimstone as a rage of Word Eater Terminators also arrive to contest the Thunderhawk, fortunately on the other side of it. 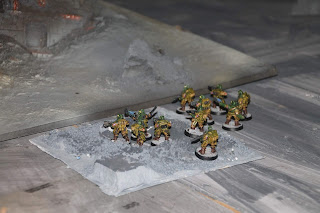 When the World Eaters arrive so does a valiant member of the Holy Ordos Hereticus, to lead and support the nearby Cadian FS Plt.  Who promptly open fire on him, not knowing who he is.  Fortunately no damage was done. 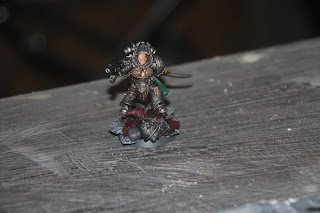 World Eater Terminators  They got a bit closer to the objective, but then I suppose they're less risk averse then carapace armoured normal men on grav chutes, as demonstrated by their method of arrival.  "A Rage" is the best collective noun I could come up with. 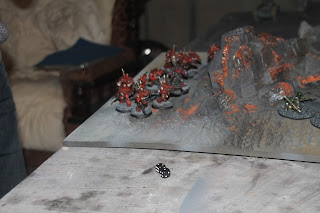 The Inquisitor prepares to face the foe, who fortunately have their reaper cannon armed man at the other end of their unit.  Nice to see the Cadians sticking to their tactical doctrine and keeping adequate distance between them and the enemy. 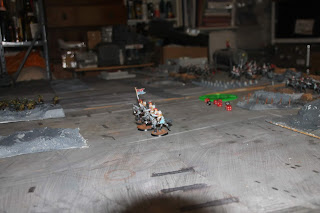 The mounted grenadiers (Dragoons ?) doing their famous widths of the pool. 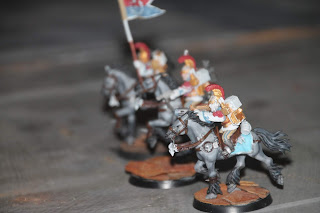 See the sweat, the frothing at the bits, smell those horses.  (They're Chaos Marauder horses because they are butcher and altogether more, um, manly than the usual 'empire' horses.  A lot of the Macharian Thunderguard are on these, all with the the chaos iconography carefully scrapped off.  Those reins are retrofitted so that they go to the riders hands, the lances on the lancers are amazing as well) 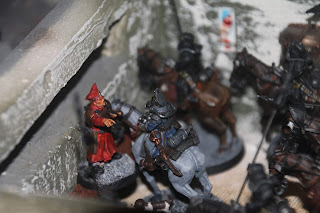 And here we see the endgame, the DKK commissar challenges the PDF commander and defeats him, gaining a prisoner for the =I= to question later.  Once all of the PDF were finally vanquished, the World Eaters reflected on their position and sough alternative employment elsewhere, leaving the securing of the Thunderhawk crash site as a famous Imperial Victory.

Rigged for demolition, the Thunderhawk was denied (to the enemy) a few hours later.

This Battle was brought to you by WH 5th Edition and sponsored by Col Ackland, and Australian temporarily resident in Sweden.