Defenders of freedom, truth and justice.

The Gallant Col Ackland had more or less triumphed over the filthy heretics (although was in danger of getting his head stoved in by Ogryn at one point).  It was Sunday: the Sweden resident Australian had to fly to Switzerland Montag morning, we had time to array the forces defending Devos IV. 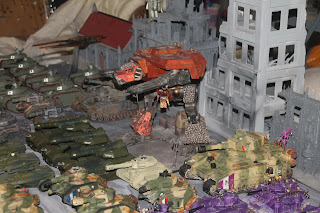 That's a trio of turreted Laser Destroyers in front of Belligera Rex.  It transpires that Col Ackland has a warhound which he's converted to reflect it's allegiance to the six armed emperor.  He ought to blog that, even if it's WIP. 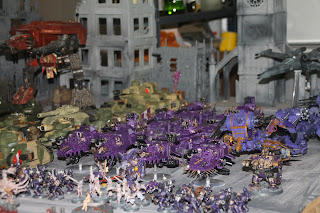 The armoured spearhead of the Emperor's Children, cause who doesn't like purple tanks ?  Those defilers need a bit of love, though. 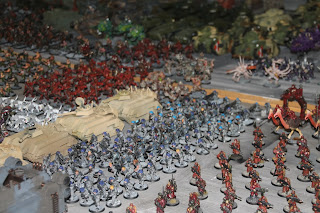 Blood pact nearest us, note the Terror Bird Death Riders at the back with the 2ed Sentinels.  Then the Devos IV PDF 2nd Regt (La Guardia Presedentiale), a row of Chimera which also need a bit of love, a column of the lost and the damned (World Eaters, Beast Men, Warpsmiths from 'The Cleaved' and their plague zombie/automata). 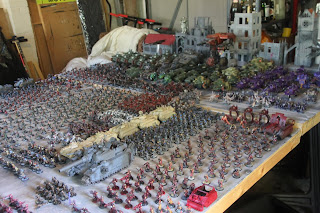 The Storm Lord in front of the 2nd Regt carries the modest detachment of camouflaged Veterans who are parading in front of it.  Stretching away into the distance are the PDF 13rd Mech Regt (The Tigers) who you will note don't actually have any APCs/IFVs.  And on the far side are the PDF 99th Regt (The Bloodcoats).  Who some of you will remember are the Regt Gen Horpan, Erstwhile military commander of rebel forces, comes from.  Will having two formations with similar names confuse the Imperial Guard ?  Yes, undoubtedly. 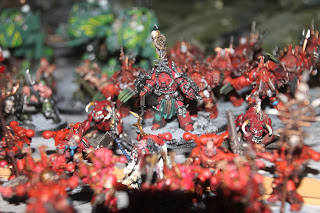 And in case you were wondering what mighty luminary could possibly hold together such a diverse, multi-faith, cross party, collaborative, modernist organisation, look no further, Ladies and Gentlemen, I give you Zhufor the Impaler, Master Butcher of Leigh on Sea.
Posted by Zzzzzz at 01:56

Labels: Khorne, project, Renegades and Heretics, the campaign. OMG its a small world