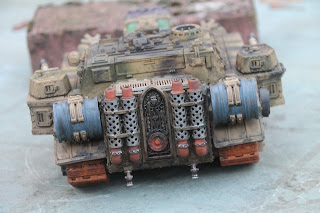 As with the Macharius, I managed to put a little time in on the Stormblade.  I had a couple of days off sick - my delightful children had given me a sore throat, the type that progresses to a dry hacking cough which ruins sleep and renders one ineffective at most things.  But those one or two hours of functionality can reap a small commiseration prize. 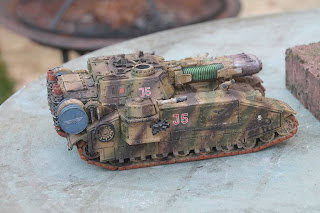 The original call sign P20 was eventually declared BLR* and the hulk backloaded to be shipped to some Emperor forsaken armoury world somewhere it would be stripped down to the bare hull and rebuilt.  It's likely that some of the working parts (which kept failing) were hundreds of years old before it came to Devos IV.  The 10th Hvy Pz Abt has received its replacement asset; a Stormblade. 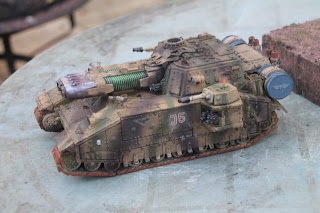 Kapitan Merkall has decided to make J5 her command tank.  It is entirely likely some one higher up the chain of command will decide to make it their command tank, however, until that happens, Kapt Merkall has the honour of commanding the only true superheavy DKK tank on Devos IV. 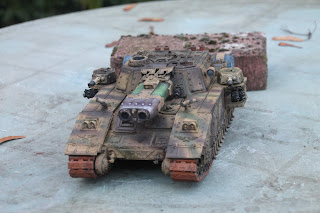 Like the other tank (the Macharius) this has yet to much more in the way of weathering than a rather heavy pinwash.  Although there has been a bit of effort to make the back end look rusty, sooty, oily and dusty all at the same time.  The crew access ladder can go back on when it's looking a bit more worn 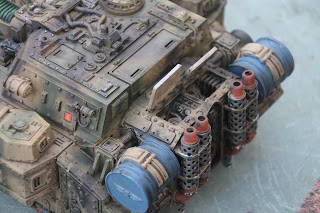