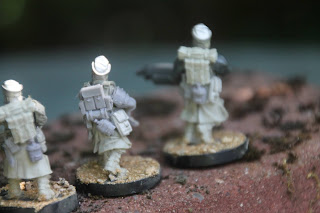 The previous post was about some trial models.   Which worked out OK and now there's a natural pause in the order of things (I'll explain), it was time to get these guys together.  You're looking at the back of some supporting machine gunners. 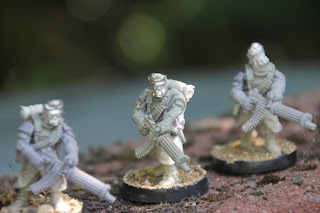 And the front: pig iron heads, VL 'VERA' arms and bandolier torsos and VL greatcoat legs plus assorted other bits of kit.  One things these 'just assembled' picts show is the multi bitz nature of the kits.  Which is nice. 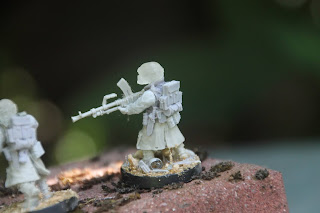 More MG gunners, this time with the VL bren gun, a Cadian respirator head from shapeways (in clear, so you can't the detail at all here).  Some FW belt kit there. 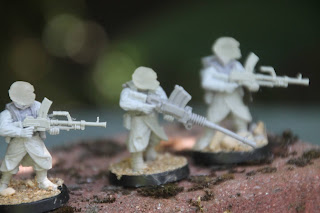 You can see here one guy has been given a FW DKK Heavy stubber instead of a bren gun.  Presumably the armoury had run of bren guns and gave him that because of the superficial similarities, instead of a comparable weapon system. 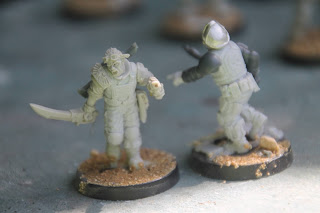 Capt Meal Radic, with the hat on.  And Lt Kratek, without a mask.  Both stalwart adherents to a more extreme version of the Imperial Creed.  Led by men like these, these reinforcements will fit in well with the DKK or the Black Templars. 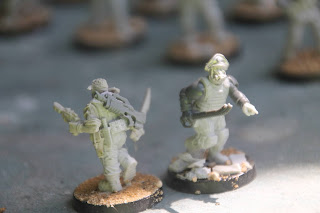 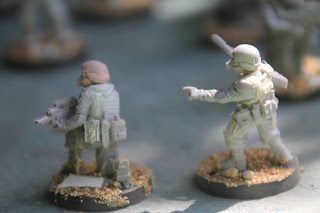 Some picts of the riflemen, showing them loaded for a real shootin' war and armed with FW elysian rifles. 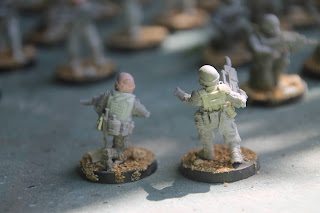 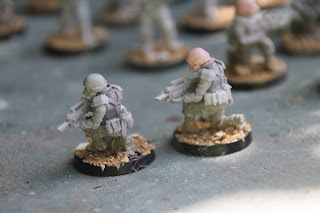 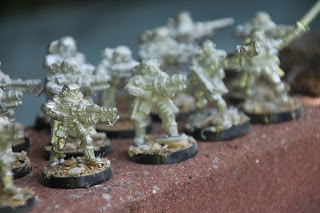 Some ye olde worlde Storm Troopers who I thought would blend in nicely. 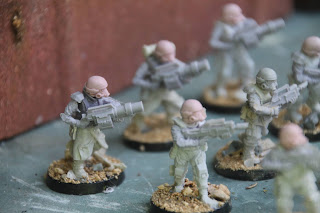 Grenadiers.  There are only three at the moment, but the storm troopers are mostly special weapons so I'm ok with that.  For those unfamiliar with Killzone and wondering why these guys aren't organised into IG squads; all of the differing soldier types in the video game dress differently and wear different hats (literally, some helmet variations and lots of side hats and so on).  One might suppose that this makes telling them apart easier for the game developers, the gaming engine and ultimately the players as well.  Which means that I can then use bits from all over and it still all looks OK. 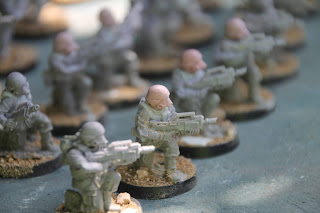 There are more to do, as I alluded to earlier - I have some more bits to use - but I should get my 3D printer in a month or so; so I'm going to see what I can get out of that in the way of infantry bits before I send anymore spondulies to VL or anvil (Mad Robot are looking good too, but the postal system out of the USA is antediluvian).