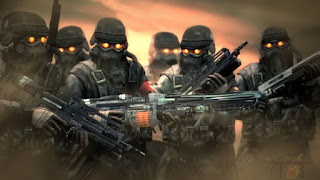 You may remember me searching for Helghast helmets (they're from Mastercrafted.co.uk, who also do the assault gun kit I used for the Steel Legion Stugs).  The time has finally come for me to actually do something with them.

I've never played killzone.  I've never been any good at FPS games and struggle with things like Skyrim ("What ?  You mean in order to master the combat system I have to wander about and cause massive environmental damage by murdering every single one of gods creatures for hours before actually doing something ?  Great."  reaches for off switch) but the imagery of the Helgans and playing the game from the POV of the baddies caught my imagination.

Anyway, I resolved to make some of these 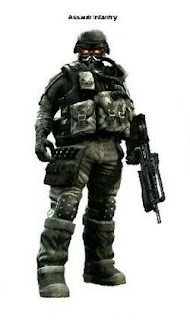 I bought some parts and made some test models. 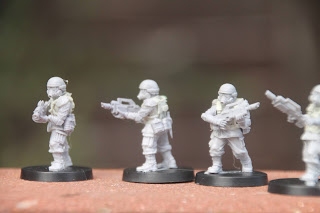 These are VL legs and torsos, mastercrafted heads and FW elysian arms which I have been hording for years.  The VL torsos have some shoulder armour and huge landing spaces for arms, so a little LGS (it reconstitutes with water, how kool is that ?!) and some spare shoulder guards from the DKK fit the bill there. 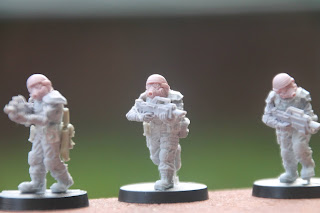 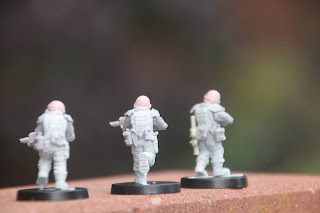 These are Anvil fatigue torsos and legs.  I think these are the 'advancing' legs, I think the static ones are a slightly better set of poses.  The Anvil torsos had plain shoulders which made fitting the Elysian shoulder guards a much simpler prospect than the effin' about accommodating the existing VL shoulder armour.

These boots fit the aesthetic of the picture above much more closely than the VL ones.  However, the VL mouldings are crisper and the Anvil kneeling fatigue legs come in a pack of three, one of which is seated, rather than kneeling, hence making them a less attractive proposition than  VL's set of six kneeling legs.

I'm going to continue buying different items from the ranges of both manufacturers, as there are many sub-types of Helghast soldiery.