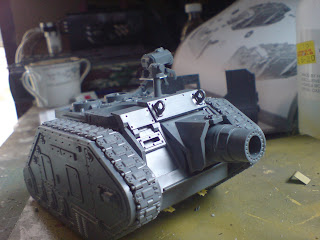 Vindicator bits in a LRMBT hull. No doubt someone has done it before, but that's ok, its not like any of GWs IP is actually original in itself is it ? 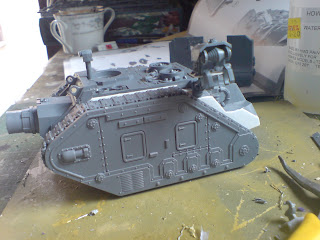 There were a few fit issues and some bits and peices could have been done better. For instance where the shell winch sits on its arm, the plasticard plate obviously looks like it should be braced or supported. But I'll do this one and her sisters up to a point before going mad on detail that I might not be able to reproduce. 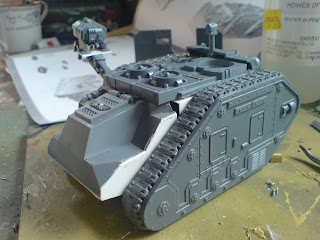 I'm a bit stuck with the cupola. It will have to be an iggy one for continuity's sake, but it'll need cutting down to a level to allow it to sit on the vindicator hull top. Also for the next ones I intend to cut out the louvred plate to allow the extractor fans to be recessed lower in the hull. 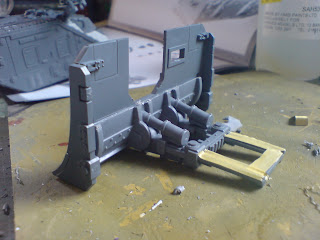 This should show the butchered iggy dozer blade now relegated to being the mount for the siege shield. I don't know about fitting seige shields to the next two, but more about this below.

Generally speaking, the turrets on LRMBT are too small for their armourments. For scale and layout, they resemble early WW2 russian tank turrets. In the 1980s, GW obviously decided that if they put a proper scale gun in their LRMBT, then it would constantly be getting broken, which resulted in the 'normal' battle cannon having the dimensions of a howitzer or petard.

Which means that the LR Demolisher is just ridiculous. If you have the chance, hold the shell from a vinicator up against a demolisher turret. See ? I know that it's all made up and therefore doesn't matter, but still.

So the only sensible configuration for a Demolisher is for the demolisher cannon to be hull mounted. A turret mounted laser cannon, whose ammunition supply amounts to a HV cable, is a far more sensible proposition.

But FW have published rules for the Fundara and this little project will leave me with a couple of spare LRMBT turrets for the next project, so the thing you see above is what I'm working on.

The others may get a mine plow and a ditching beam/fascine; all good engineering things for combat engineer assets.
Posted by Zzzzzz at 14:06