The Pawns of Chaos


Long planted agents of the ruinous powers are awakening their sleeper agents on Devos IV.  Somewhat ironically, most of them are on the continent of Benq, where the major Imperial shrines and Planetary Capital are.

The populist revolution is being led the followers of Chaux Na Mrr’see.  These are most definitely Slanneshi aligned; artistic freedom, free speech, unfettered press, delicious food, adequate heating in the winter, all round soft and comfortable living for party members are their hallmarks. 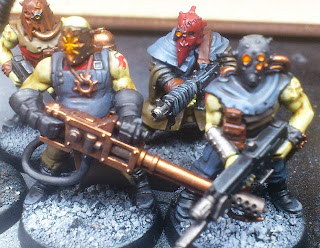 But there are more zealous elements to the rebellion; the Word Bearers, led by their Apostles, are fighting the long war by awakening the hidden sleeper cells.  Around the capitol, Xyphonica, the cultists are making themselves known to each other and are arming up.  As the Cawdoresque workers of Acer become more vocal and strident, so the Pawns of Chaos begin to openly organise themselves into armed bands “to protect their communities”.   Legally allowed to own and bear military weapons due to some historical quirk, they are poised to bring anarchy and destruction to those very communities they espouse to protect.

With an eye to their location, the word bearers long ago set their recognition symbol to be the star of chaos undivided, hidden in plain sight as a throwing star pendant, as sold by countless gift shops on the pilgrimage routes from the Spaceport to Xyphonica, an ecclesiastically sanctioned memento of the fabled assassin cults in their hidden temples across the planet (somewhere).

Additionally, to avoid causing alarm amongst the Slanneshi leaders of the revolution, the cultists wear a lobster somewhere on their person, as an embroidered badge, a tattoo or painted on.  How this satisfies the cursory scrutiny of Chaux Na Mrr’see’s inner circle is unknown, but it does. 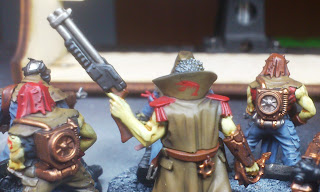 Of course the truth is that the Dark Apostles are merely using these cultists.

Excellent paint by Mr Lee.
Posted by Zzzzzz at 10:22