I'm supposing that most of you have figured out that my posts are lined up for a Friday and normally writted four to six weeks before you get to see them. Well, if you didn't; now you know.  But I've made some progress with the DKK vehicle fleet (on my own !) and thought you might be interested.

Even more relevant, "Why now, Zzzzz ?" I hear you ask.  Well, there is every chance that these boys will need to hit the table in August, so they need to progress to a point where I can put them on the table and they don't look like a entire fleet of base coated models compared to all of the finished infantry.  So. 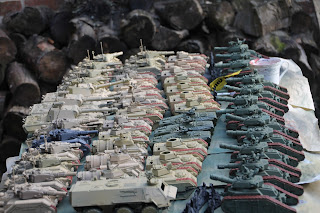 A lot of Sunday was spent putting the redblack basecoat on the tracks.  I've actually used almost a while pot of dark flesh.  Yes, most of my paints are that old. The plan is to hit these with weathering powders and then a 2B pencil; this works well for tracks on WW2 tanks; a lot of these have standard GW tracks and the green tanks (of the PLA) that you can see to the right of the line up above, have tracks which might look a little odd given that treatment; basically because they don't look like the tracks on any vehicle ever seen IRL.  Oh well, we'll see. 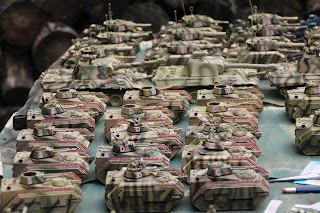 So then my seldom used airbrush was broken out and the camouflage applied. Free hand wavy lines FTW ! These are not strictly speaking the correct Wehrmacht colours, but they're DKK, not DAK, so it's Valajeo Model Air Dark Camo Green and Tank Brown. I got as far as beginning to mark them up - these are the tiddlers from Archer fine art decals 1/35 WW2 German Turret numbers in red with a white border.  I've got the FW auto cannon turrets on order (for WYSIWYG) and will get the 1/48 number to replicate the exercise as the 1/35 ones are a little on the large side. 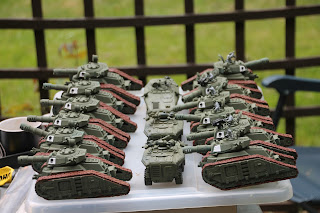 A front piece of the  AT-7 turret was masked off and treated to two coats of fortress grey and then skull white.  This then got a black skull from the GW transfer sheet.  They will get turret numbers in white from the Cadian transfer sheet.

Oh, Happy Canada Day to everyone in Istanbul.  And Canada.

I hope to continue with a little more progress on Wednesday evening.

A quick word about the photography; I'm trying to follow the guidelines that Karitas gave me; using the 'close up' setting, standing far enough away and then zooming in to actually capture the detail.  If this is making any sense at all to you, your camera possibly also has a flower as the indicator for the 'close up' setting.  So whilst in Cornwall earlier in the year, I actually used it to shoot some flowers. 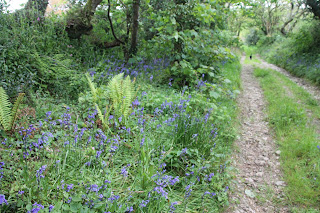 It looks pretty, but isn't what I was expected or what I wanted, so I had another go a bit later: 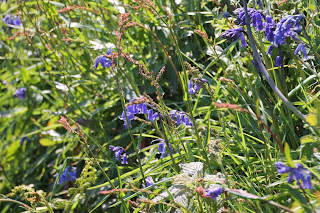 And it works on yellow as well !  In bright light the colour saturates a little more than it does under slightly less sunny conditions.  One could suppose that this is similar to when your little man looks a little duller and not quite as vibrantly coloured in the pictures as he does IRL.  An interesting point.  If you look at my pictures of the fight with the Blood Angels you can see that shooting in bright light really does keep the colour looking good. 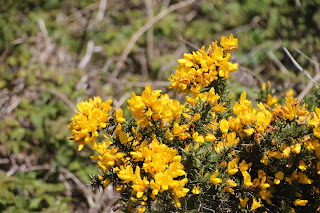 I quite like taking pictures of flowers.  Oh er, that'll loose me man points down the pub....
Posted by Zzzzzz at 21:42