Eidolon, a fallen Astartes, and his bitches.

You know that PVP painted up my purple marines ?  Well, it occurred to me that there hadn't been a post where they got shown off.  So this is it.  I do hope PVP doesn't mind, but his photos are brilliant so I'm reproducing them here, along with some action shots ('cause Muhven 158 might not be Devos IV, but it is an exciting place to be !)

And as John (from John's Toy Soldiers) says, Purple is the only colour for renegade space marines. 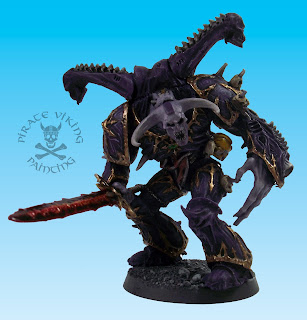 Eidolon, the deamon prince.  As an ancient pre-heresy dude, he is made of metal.  Oh for lash of submission.  Twin Lash Princes would have been so much fun.

Deamonettes.  These last generation metal ones are the sexiest.  I realise that there is something fundamentally wrong with me saying that, but they are supposed to be 'wrong' on that level.  And its true. 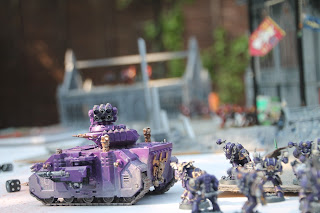 As promised, in action, hunting Blood Angels who showed up to take out Eidolon. 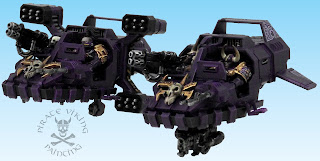 Two land speeders, the speeders run as multimelta and heavy flamer.  I had also envisaged the tornado whizzing up and down the back line, shootin' at things threatening home objectives etc etc. 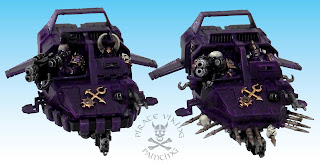 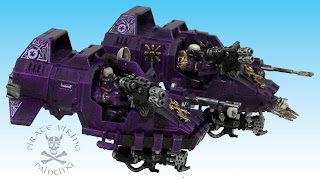 Two more views of speeders.  Multimeltas for armour, flamers for infantry.  Sooo lucky that speeders are invincible and cannot be shot down by anything short of Primark in a flying fellblade. 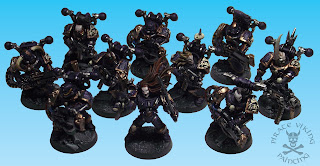 Two squads of noise marines.  Once in position, they chuck out a fair amount of firepower.

Zappapreds.  Of course they come in threes, one is not enough, two is normal and three is altogether more slanneshi.  A sort of anti armour menage a tois.

Dakkapreds.  Cause you can never have enough Dakka !  I have no immedate plans to add to this purple army, as I have to wait for PVP to get his vision back and stop seeing everything in shades of purple (there are three Defilers in a box in the garage).

I am expanding the CSM contingent; the Purple ones fit the Devos IV background/campaign/fluff.  There is an expanding Kellog's Khorne Flakes force, who have a history of opposing the DKK, but I'll save them for a later post !
Posted by Zzzzzz at 12:00