There was a small display of new products from Thundercloud Miniatures; I did have a chat with the guy there.  The range is small at the moment, but they are doing more.  The photo does not do it justice, but the Easterling/Kislev type archer on the polar bear was getting a great deal of attention. 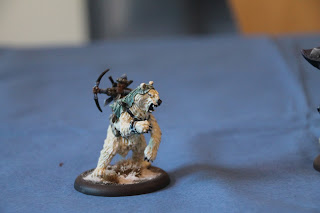 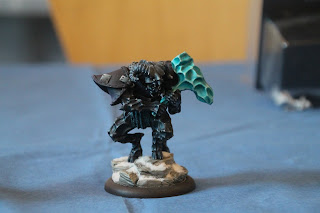 And moving swiftly on, a highlight for me was the absolutely not a genestealer cult from Macrocosm Miniatures.  Macrocosm do squats as well. 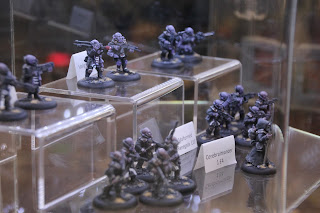 So there are is a big enough range to throw yourself together a decent scale cult. 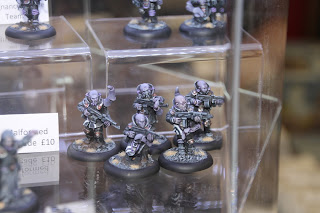 No limos though....     But with the release of Deathwatch, these guys should see some more love.  The man I spoke to did say that he'd already noticed an interest in hits on the website. 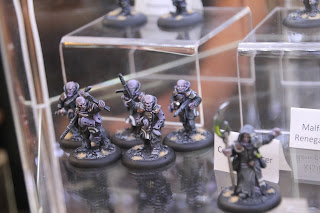 I did indulge, picking up a pack up hybrids ('cos they're nice minis), which is breaking a rule. I plan on comparing and contrasting these against the Deathwatch ones fairly soon.....   I also picked up a handfull of 25mm and 60mm laser cut bases, which are are allowed under the rules as they are to enable finishing up things in the bitzbox.

I also picked up a box of Frostgrave cultists.  Which I am allowing under the rules under the 'using up weapons' and therefore allowed.  No really, that's a genuine and great reason. 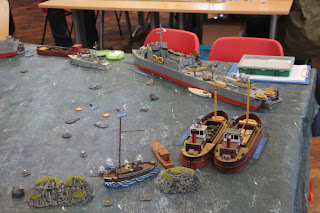 There was also a naval game in a unusual scale (for a naval game).  It was actually based on a real Italian torpedo boat raid on the RN in Crete in the early war.  But all I think of was HMS Troutbridge.  If you follow that reference you're probably, well, you know. 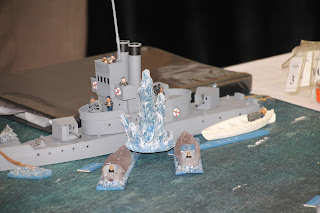 But "Yea !" for scratch built models. 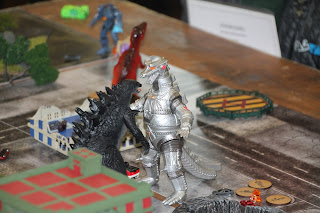 And of course the last picture has to be real Godzilla vs Robot Godzilla.
Posted by Zzzzzz at 08:21