Here are a few more of my photos from the parade day.  This time, the units which are force multipliers, that is, those whose contribution increases the combat power of the whole unit in a way which is more than simply adding up the number of dice they collectively chuck down the table. 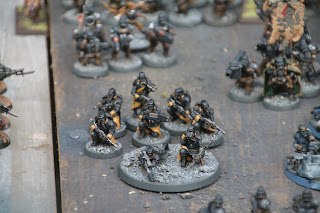 These guys are one of the Divisional Arty's FOO teams.  The Assault Bde list also lets me declare the Sqn 2iC's tank as a FOO asset as well, so that's another one.  These guys are mostly taking cover and have all the stuff one might expect, as well as having a real sniper to go with the nine mile ones they are actually directing. 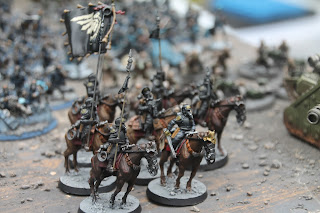 Masta Cheef met some Death Riders in a Kill Team game the other day.  A great use of Death Riders - in their recce role.  As either a screening unit or a counter attacking unit, these fast moving 2 wound wonders are great for jogging around urban areas in a way that vehicles can't at a speed that footsloggers can't match.  The 11th Uhlan Regiment sits nicely in the Divisional ORBAT. 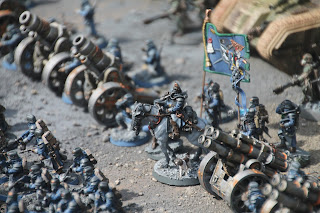 And of course, the Field Artillery;  262 Line Regt comes complete with batteries of Thudd Guns, Heavy Mortars in its Fd Arty detachments along with a generous sprinkling of Laser Cannons and Auto Cannons as AT and Fire Support.

And here's what that corner of the someone's world of hurt looked like on the day: 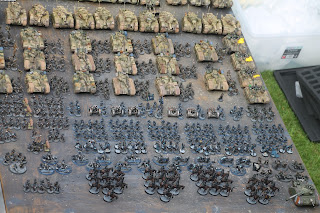