I suspect that some of you will be familiar with Spartember, as Siph as posted here.

I don't have a large forgeworld tank to put together (sorry, Dai), but do have a couple of other models which have been hanging about for a bit and really need putting together. 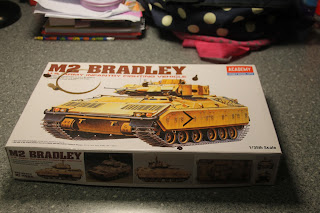 The 1/35 Bradley was an impulse buy a few years ago on a rainy day, possibly when the small people were cheesing me off.  Academy kits have a decent reputation for accuracy and going together well (generally, the more detailed the scale kit, the more of a pain in the arse the build is - who'd have guessed ?).

Even as I took it off the shelf, this was going to be a Command Vehicle for a bit of one of the armies.  As things stand now, it's going to be the Blood Pact, which means 40Kificating the model as it is built.  I could build it out of the box as a US Army model; this is an attractive idea as you'd all be able to see how well I'd done.  However, it'd just get kicked about and smashed, whereas I could actually use a Blood Pact Command Vehicle. 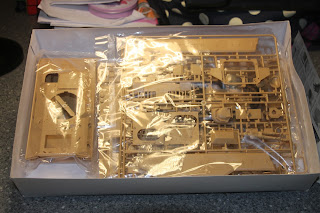 My apologies for the glare on this picture, it's just to give you an idea of the number of pieces on the sprue.  It's an order of magnitude more complex than a GW kit, but nowhere near the recepie for tears which the Eisenkarn Mecha looked like. 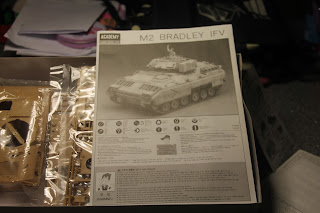 But, scale models have good instructions.  Some are better than others but let's face it, if you've experienced Forge World instructions, then this sort of thing is both blissful and slightly daunting. 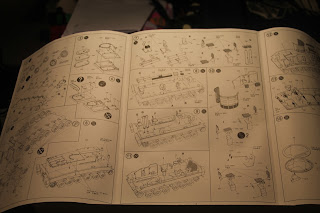 So all I have to do now is pull my finger out and get on with it.  I'm working Monday night but we'll see how far I can get by the end of next week.