IA1 (at least my copy, I don't know about the new edition) contains an Orbat for the DKK 19 Armd Regt.  Which is nice.  It's also why the Engr support for my iggy army (902 Div of 16 Korps of 72 Army Group) is the 11th Saranean Engineer Regiment (or part thereof).

Anyway, as a part of the mass collaboration project where I cunningly get other people to build and paint command squads for me*, I entered into a mutual support treaty (I was going to write 'pact' but that didn't seem right for the Imperial Guard....) with Courtney from Cadian 127th. 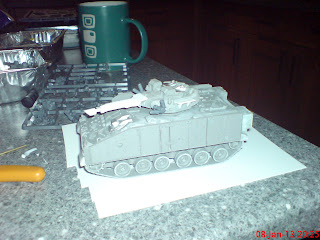 He found a 1:56 Warrior which is a stunningly good model.  And the castings are good too.  And it's not too expensive.  But it is a bit smaller than a GW Chimera and so rules lawyers might whine if you wanted to use it in a pick up game. 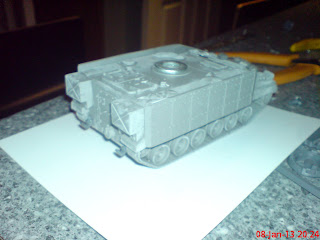 I took what I consider to be a couple of brave choices with this, firstly, by mutual consent the true scale 30mm cannon got replaced with a Chimera Multi Laser.  It didn't look too bad and hopefully will look even better painted.  Then snipped off the true scale smoke dischargers and replaced them with a set from the SM vehcile accessory sprue - they look a little more high tech than the iggy ones and make the whole vehicle look like a compact WH40K vehicle, rather than something dropped in from another planet. 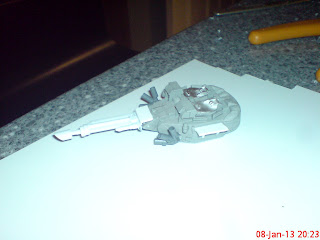 The armoured sides add a little bulk to the model.  And another set of hooks at the back add a little.  The turret is raised (to allow adequate clearance for the ML equipped turret to traverse) by a washer and I'm going to find a bigger bit and provide a brass rod as a locating pin.  If Courtney wants the turret a little lower then he can chisel the washer off and have a look - he could always stick back on again.

The shelf is to mount the HK Missile - again the SM one, as ties into the look of the vehicle.  I did toy with grinding off and plasticarding the roof of the turret, in order to fit a WH40K hatch and so on.  However, I'm hoping that it looks better left as it is.

The Command Squad are built to reflect their role as Combat Engineers.  Hence the double chainsword and double melta gun.  Not exactly netlist, but rather to reflect their pre-occupation with clearing obstacles. 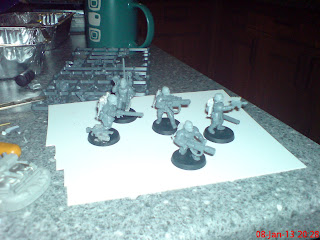 The heads are the decent ones from the Wargames Factory Greatcoat Stormtroopers set, to tie these felllas in with the Saranian Light Infantry painted by PVP.  The sights and underslung GLs are from Anvil Industries and their backpacks are from Defiance Games UAMC Marines, which are an excellent kit and arrived promptly, unlike their German kit.  The backpacks look techie enough for engineers, down to the little ariel detail.  The also all have an entrenching tool (with bayonet) from the DKK set, after all, they need something to dig with and they don't have a JCB. 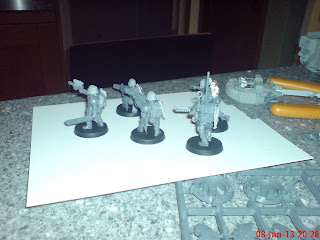 This post is scheduled waaaaay in advance and hopefully by the time you read this, these guys will have made it through the warp to the Cadian 127th, to add their support in the emperor's wars.  I plan on a painted up post with the actual fluff I wrote for these men in the future.

*Having them done in the colours and idiom of other IG armies out there I thought was important.  Half a dozen command squads of random regimental schemes drempt up by me is just not as flufftastic as drawing these squads from the armies of other guard players out there.  It gives 16 Korps Headquarters a feel of authenticity, perhaps (?).  And Lord Zhufor a more interesting selection of skulls to collect, perhaps.  Another thank you to those who participated.  There is a place for you at the Devos IV gaming table, subject to the approval of the High Lord of Terror.
Posted by Zzzzzz at 16:57