There is a new product out there that doesn't seem to have been reviewed to death.  So I thought 'Why not ?  I'm sure the blogosphere is waiting for some innane waffle'.

A fortykay campaign book, as a concept, would seem to be what the bloggers (that I read) want.  The IA books being a little on the pricy side, this would seem to be an easy win for GW.  However, comma, that is a hitch in itself.  GW doesn't really want to be seen to be undermining FW.  On the other side, the people who buy FW stuff will continue to do so no matter what the wider GW does, so perhaps its not such a big concern. 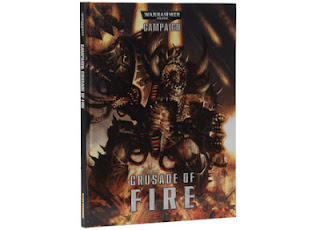 So then, Crusade of Fire itself is in the same glossy, d20 (AD&D 3.5), format as the kaos kodex.  If the Dark Angle Codex is different, I will be extremely surprised.  There are colour spreads of the armies that the studio used to play the campaign before it was released to us.  Which is nice.

Those armies pander directly to GWs target demographic and we should not be surprised by this.  They are very nice to look at, showcase a variety of ways and colours that Spaze Muhreen armies could be put together by people with skill and imagination.  But there are still, Phil Kelly's DE aside, eleven pages (out of 96) of Spaze Muhreen armies.

From GWs perspective; getting their target demographic to further explore the possibilities for armies they already have started, its a no-brainer.  From the POV of someone wanting campaining material, it's ~10% wastage.

The setting is OK.  The Corvus subsector appears to be one star system (really ?  it must a pretty empty area of space then) with a number of nicely detailed planets with nice reasons to fight over them.  As the book concentrates on the 40K battles, there is no mention of travel from one planet to another, nor of the 100 IG regiments mentioned in the introduction.  It deals with such distractions by ignoring them and allowing players to get on with fighting the good (or evil) fight.

The things you might want; names of IG Regiments, the way the Departmento would organise an army of 100 IG Regiments; sample TO&E, the navy committment required to move it all about, the lines of supply and communication and so on are not here.  Yet again the hard to do stuff, which some might say has no place in a table top wargame, is ommitted.  But here it is ommitted because it does not belong with the rest of this product, rather than any other reason.
There are rules for dogfighting and for mano a mano showdowns in the arenas of Commorragh; all good, but the dog fighting rules still ignore some fundamental points of air superiority combat.  The bits about fighting on a Deamon World may well get used if I ever get to a climatic battle for Devos IV.

Fortunately there is another hardback campaign book to peg it against, also published by GW (well, Black Library, anyway) 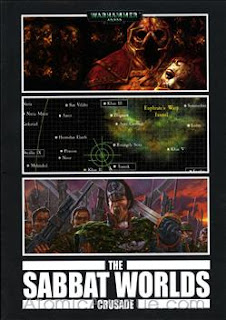 This book is possibly enough for someone who is prepared to be creative themselves, to be able to fight any of the specific missions that form a part of Slaydo's or Macaroth's plans,  Comparing the two, I get the feeling that where detail is ommitted from the Sabbat Worlds source book, it's because any players are going to have to fill in the detail from their own mini collections etc.  Where as the detail from CoF is ommitted because it's not aimed at people who want to know about the Navy's disposition and the fragility or roobustness of any lines of supply or communication.

There is also the "Codex: Eye of Terror".  Which deserves a mention.  That was it.

CoF is available from interweb retailers for £21.25.
SWC is occasionally available on the web for about £70.

Is either of them worth the money ?  As I struggle to play very often (and therefore will not actually get to use the material in either of them), no.  If you play regularly against a number of opponents, then CoF might be worth a punt, but I'd borrow someone else's first, or obtain it collectively, as you may find that you don't really need a copy each.

(Yeah, I know it says Dark Angle - you can draw their Chapter badge with an etch a sketch.)